The original design Sieg Mini Mill( sold as Harbor Freight, Grizzly, Little Machine Shop, Micro Mark, and others) featured a tilting column that few people used.  The pivot point and the relatively thin column allowed for a considerable amount of flex in the machine. I found this especially troublesome when using a boring head, for its single cutter creates a highly unbalanced load.  I could only take very light cuts, or the column would flex.  Fortunately, Little Machine Shop has been working with Sieg to improve their products sold under LMS' Hi Torque brand.  First they enlarged the table significantly, then they replaced the motor and noisy gears with a more modern design. That left one area to improve, the flexible column. 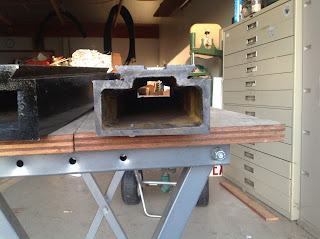 The new solid column is not just the old column with the pivot removed, but an entirely new and much heavier casting that weighs 11 pounds more then the old one.  28 vs. 17.  That is a huge 64% increase in weight.  The weight is in additional wall thickness.
At left is the original column, where they apparently tried to make it as thin as possible. 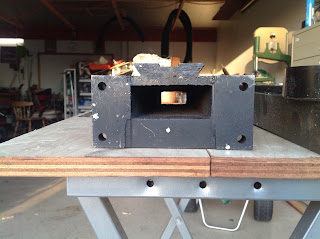 Here is the new solid column, with wall thicknesses about double the original, and a substantial mounting flange cast as one piece, rather than bolted on as before. 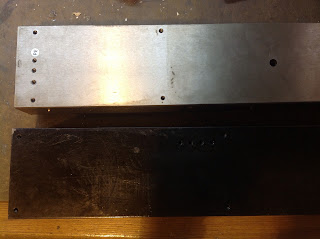 Since there is much less space inside the column, I had to trim the head of the bolt holding the gas spring in order to get it to fit inside.


The solid column comes with mounting holes for the Hi Torque electronics, which mount differently than the Harbor Freight electronics.  At left is the unpainted HF column, showing the mounting holes, and the painted Hi Torque column below it. I drilled the new column to match the HF, see below.  I also drilled a hole for the gas spring conversion. 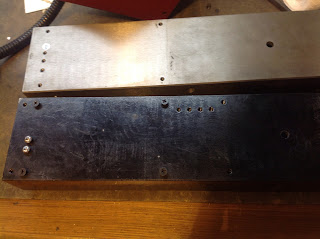 Since I had everything apart, and I am now aware of the added stiffness of the solid column, I decided to add a spacer to the head which extends the head out 19 mm and moves it up 20 mm.  I made the spacer from a piece of 3/4 inch aluminum.  It has 4 tapped holes and 4 clearance holes.  The spacer bolts to the front half of the head, and then the rear half bolts to the spacer. 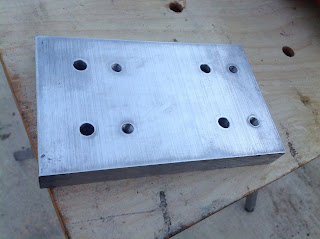 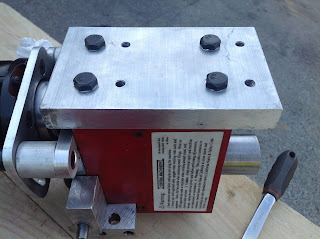 Spacer bolted to front half of head. 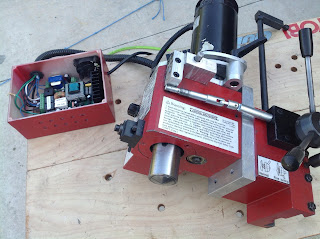 Rear half of head is then bolted to spacer.  This picture shows all that is left of my original Harbor Freight mini mill.  Everything else has been replaced with parts from Little Machine Shop.  Even this remnant of the HF machine has 4 significant mods:
Belt drive conversion.
Gas spring kit
Spring loaded spindle lock
And now my spacer.
Still to be done is the relocation of the fine feed knob. Eventually this will be replaced by a ball screw Z drive.
What does the inside of a mini mill head look like?  Here are some pictures: 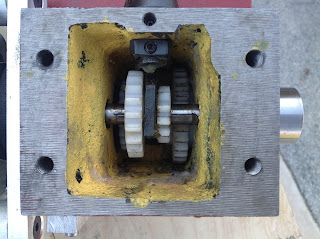 The intermediate gears are no longer used. I left them in place, but locked their position so that they are disengaged from the main shaft. 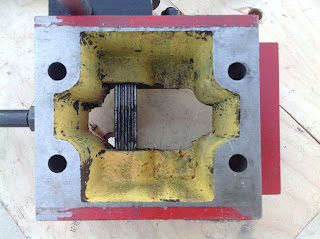 The rear half of the head showing the pinion gear. 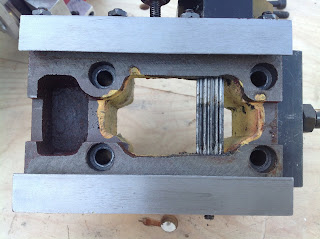 The finished machine. It is a vastly different mill than the original Harbor Freight mill. 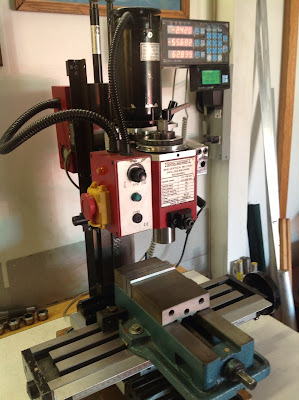 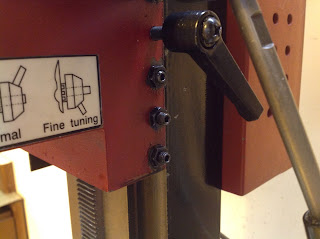 I put the machine through its paces and while it was much improved, it still had some head shake under heavy loads.  Even though I had the gibs very tight, when I placed my finger so that I was touching the head and the column at the same time, I could feel the difference in vibration between the head and column.  This meant the head was moving against the column. Unlike the gibs for the X and Y axis, where the forces are mostly pressing the sliding parts together, the head is hanging from the dovetails on the column.  This means that the four 6 mm setscrews are supporting much of the load, and their contact area is very small.  I added a fifth setscrew, and milled smooth recesses in the back of the jib where the setscrews press against it.  This solved the problem, and my DRO no longer changes its reading when I tighten the lock.. 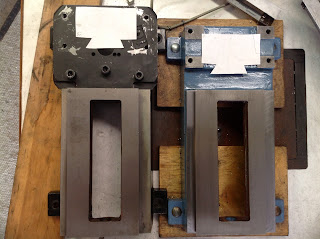 One thing I did not expect when making the conversion is that the column is moved nearly 2 inches forward on the solid column base.  Here is a photo of the two bases showing the location of the column on each.  With the pivot assembly gone, Sieg was able to move the column forward where the pivot used to be.  While this would not be a problem for most users, the column now interfered with my 4 inch vise, which I had machined to clear the pivot.  I decided that the easiest solution was to change back to the tilt column base and make an adapter to fit the solid column to it. I wanted my adapter made from cast iron for the same reasons machinery is made from it.  It has good wear and vibration dampening properties. 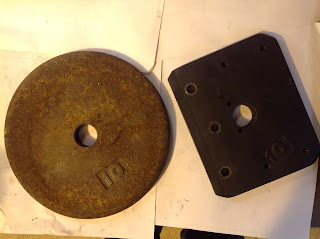 I scoured my local scrap yard for a suitable piece of cast iron and found something with nearly perfect dimensions for the job: A 10 pound barbell weight.  At about 8 inches in diameter and nearly an inch thick, it required a minimum of machining to transform it into an ideal adapter.  First I surfaced both both sides to get them flat and parallel to each other. Then I cut it square and drilled the holes.  I also had to machine a step in the bottom to match the step on the base. 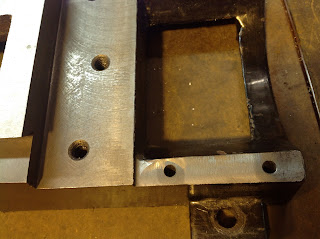 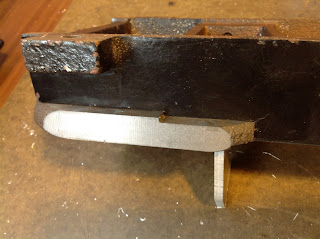 Prior to machining the step, I milled the top of the base flat.  This part of the casting was smoothed with body putty, a trick Chinese manufacturers have been using for years.  I milled the surface down until I had clean metal, then I machined the step in my adapter to match.


I then bolted on my adapter and drilled the holes for the 8mm column mounting bolts into the base.  I drilled these 14mm deep to accommodate 50mm long bolts. After the holes were drilled, I removed the adapter and applied JB Weld to the rear surface of the base, and reassembled it.

I did this because I wanted the adapter and base behave as one piece when I tapped the holes, and while torquing down the column. 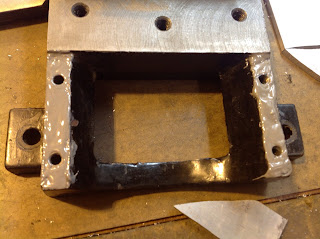 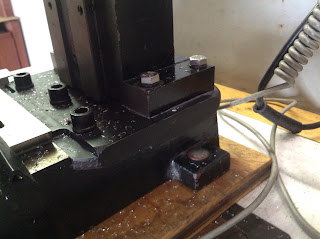 That created a new problem.  The rubber bellows no longer reached the column, so I made a bracket which clamped to the column dovetail and shortened the distance the bellows needed to stretch. 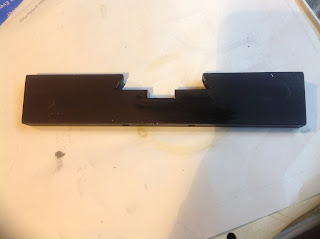 A setscrew in the side provides the clamping force in the same manner that jib adjusting screws work. 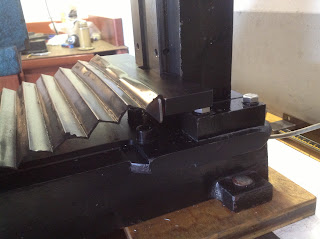 I lowered the mounting point to give the Z axis stop a place to rest that is below the surface of the table.  The original bellows mounting screw holes can be seen above my clamp. 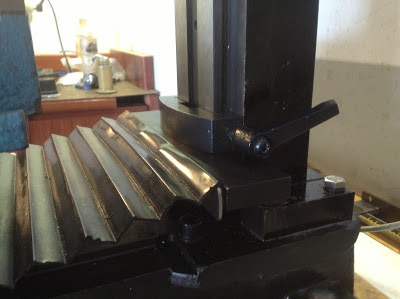 Here is the Z axis stop in its resting position. Here it does not interfere with my vise, the end of which is visible on the left.

I believe the finished machine is at least as good as a stock solid column mill, and has some advantages. The additional clearance of 0.85 inches may not seem like much, but on a small machine like this, it is significant.  My spacer in the head increases the throat depth by 0.75 inches over the stock machine.  The combination of the tilt base and adapter plate is very rigid, with the 8 pound plate solidly attached with 7 bolts.  This is a viable alternative for those who want the advantages of the solid column without having to discard their perfectly good base.
Posted by Robert at 6:50 PM