A home for my Mom

Late last year, my then 88 year old mom began to fail and could no longer live alone. Not a believer in warehousing the elderly, I built her a specially designed addition to my home. 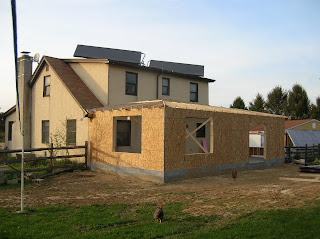 The roof was the trickiest part of the design, thanks to the second floor shed dormer and the small pieces of roof on either side.  A simple shed roof would have had a very flat pitch and looked unattractive.  My solution was a hip roof.  While much more complicated to build, it allowed for an increased pitch and tied in nicely to the existing roof-line.

My very capable Amish contractor, Amos, liked my design but soon realized that some very unique trusses would have to be made for this job. 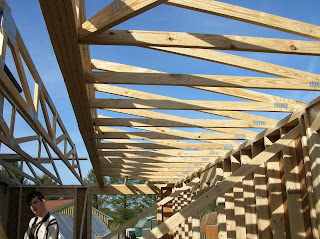 What I found interesting about this design is that none of the load is carried by the existing structure.  Instead, the trusses span 34 feet from side to side, and there is one massive truss that supports many smaller trusses at right angles.

A very strong design, but one that was difficult to insulate, thanks to the many odd spaces it created. 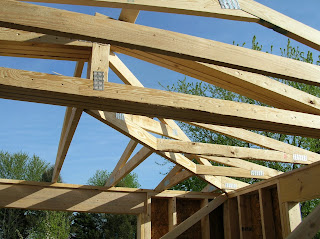 I spent hours cutting fiberglass to fit neatly in all of theses spaces.  It paid off, and the addition stayed comfortably cool with minimal air-conditioning this summer.

The bathroom was a real challenge.  The first floor had a powder room that could be enlarged into the addition.   I wanted a large shower and direct access to my mom's bedroom, but without using a lot of floor-space.  I also wanted a shower that one could wheel into, if handicapped.
My solution was a shower area that was 48" x 54" and had a tile floor that drained to the center. When taking a shower, the area is closed off via a curtain that rides on hospital grade ceiling tracks. When not using the shower, the curtains are pulled back and one simply walks through to use the bathroom or exit the original door.
An unusual design, and one that my contractor had some misgivings about, until he saw the finished product.  In the end, it works well, looks attractive, and only used 18 square feet of space in the new addition. 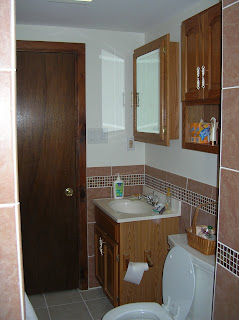 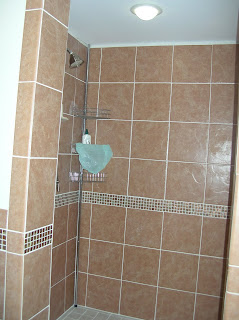 The tiling was a challenge, thanks to the multiple inside and outside corners, and the sloped shower floor.  But I like tiling,
and this is only the latest of several bathrooms I have done. 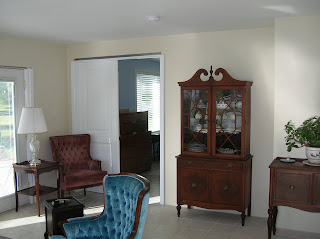 It is a bright and cheerful space, with plenty of room for my mom's furniture.  Far more than she could have taken with her to a retirement home.
If you noticed the missing trim above the doors, you can relax.  All of those little details are now complete.  I felt it was more important to move my mom in quickly than worry about having everything finished.


My mom and my cat in her new living room. 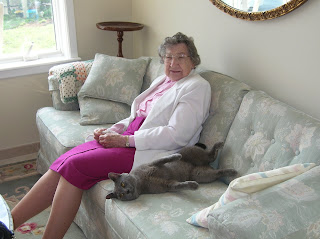 As my mom's health has declined, I've had to add some refinements, like a ramp to the door, and a new 4 foot wide walkway.  There were only 2 steps before, but now even a single step is a problem.

I also added a shower chair, and grab bars in the shower and on the wall opposite the toilet.  The toilet assist bars were easy to install and work well.  This should make life a lot easier for my mom. 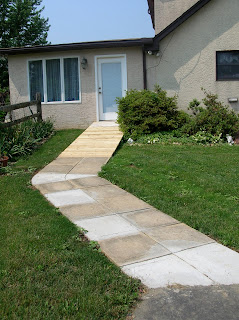 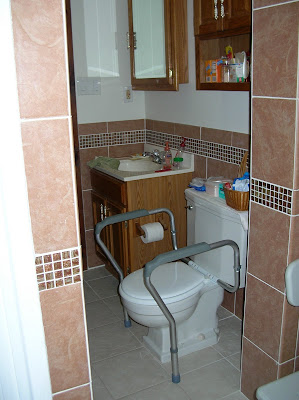 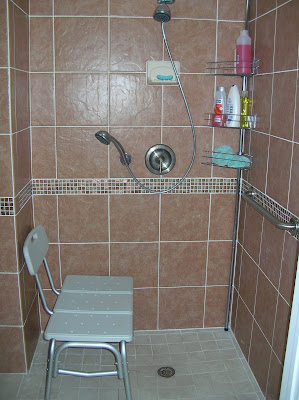