I have a Lorex security camera system that works very well.  However, after a year in operation, two cameras developed blurry areas in the bottom 1/3 of the image, and the colors were not as good as they used to be.  At first I suspected moisture, since these are outside cameras.  But when I disassembled them, I found the day/night filter had come loose and fell out of place. This caused the blur at the bottom. 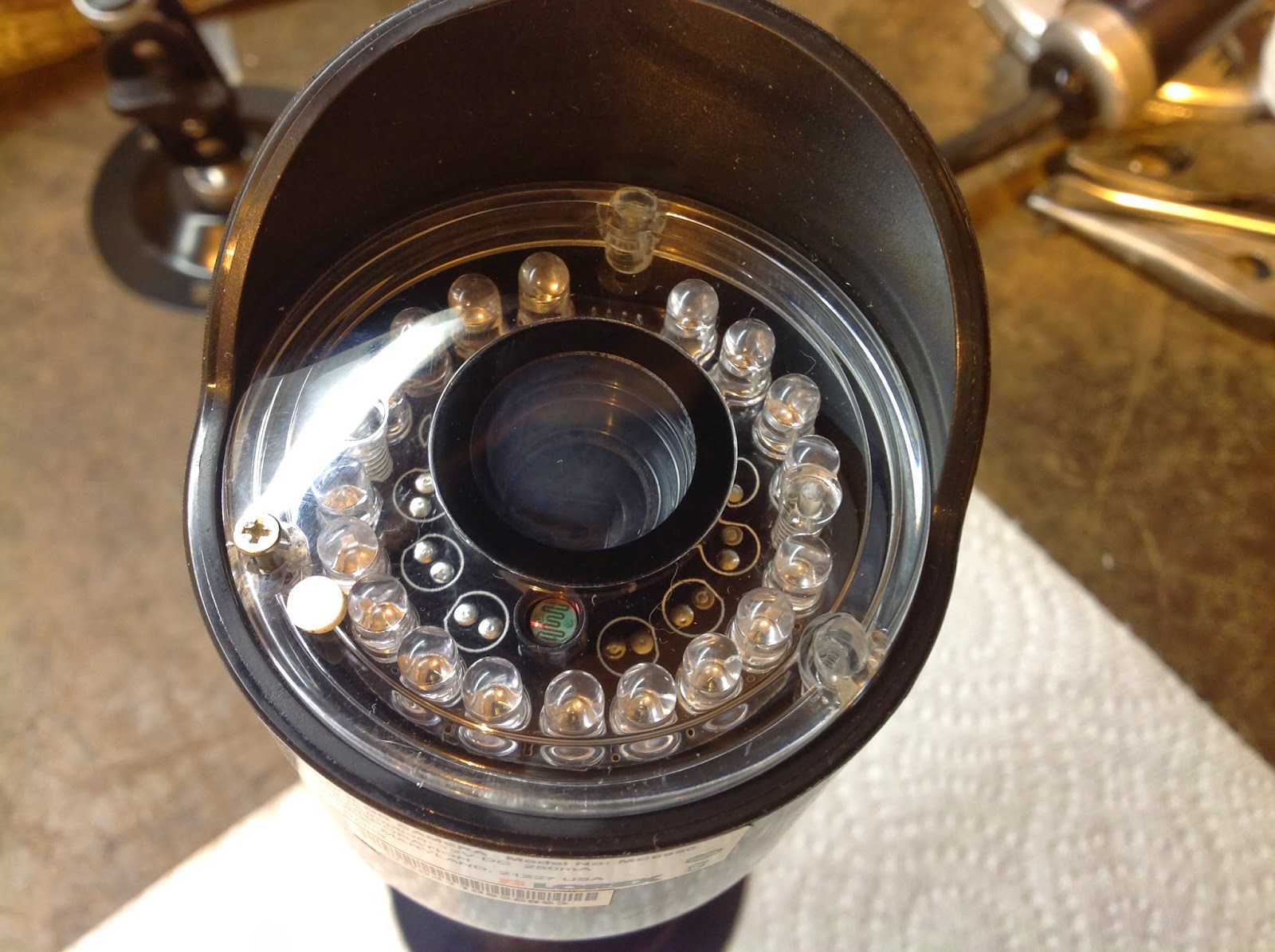 Here is how to disassemble and repair the camera. First, pry out the three white plugs in the lens, and then remove the screws.  One of the white plugs can be seen under the screw on the left. Then gently pry out the lens. I put a screwdriver in the holes and rock the lens loose, a little at a time. I change holes and rock some more. Do not exert too much pressure or you will crack the lens.

The lens and electronics come out as a single unit.  There is an O ring around the lens and each screw.  These are critical, even in indoor use, to prevent moisture from fogging the camera.

Remove the two screws in the black plastic plate, and the lens and infrared LEDs will come loose.  Unplug the LEDs and set them aside.

Turn the camera over and lift off the motor and filter assembly. Be careful not to lose the filter!  it may fall out as soon as the screws are loosened.  Notice how the filter has one half that is red when viewed under certain lighting angles.

On my camera, the red half is on the right in the disassembled picture. It is important that it is oriented properly. The filter has a front and back. The small side fits into the plastic frame.  It appears that it was intended to be a snap fit, since I do not see evidence of glue. However I have to now glue mine to secure them in place.  Use very small amounts of glue and do not get any on the lens or the filter.  If you do, the camera will be ruined.

Reassembly.
Stretch the O ring over the lens. Try to get it on without it twisting.  It will seal better if it is back on the way it was originally.
Press the lens back into the body, and see that it is uniformly bottomed out. Do not use the screws to pull it in place, or the lens may crack. Tighten each screw a little at a time.  Your camera should now be as good as new.
Here are some tips on identifying the camera models. There are 50 viewing angle and 90 degree viewing angle cameras that look nearly the same.  You can tell them apart by looking at the lens.
The 50 degree camera is on the left, and has a small lens in the rear, behind the day/night filter. In these cameras, if the filter is loose, you can see it. 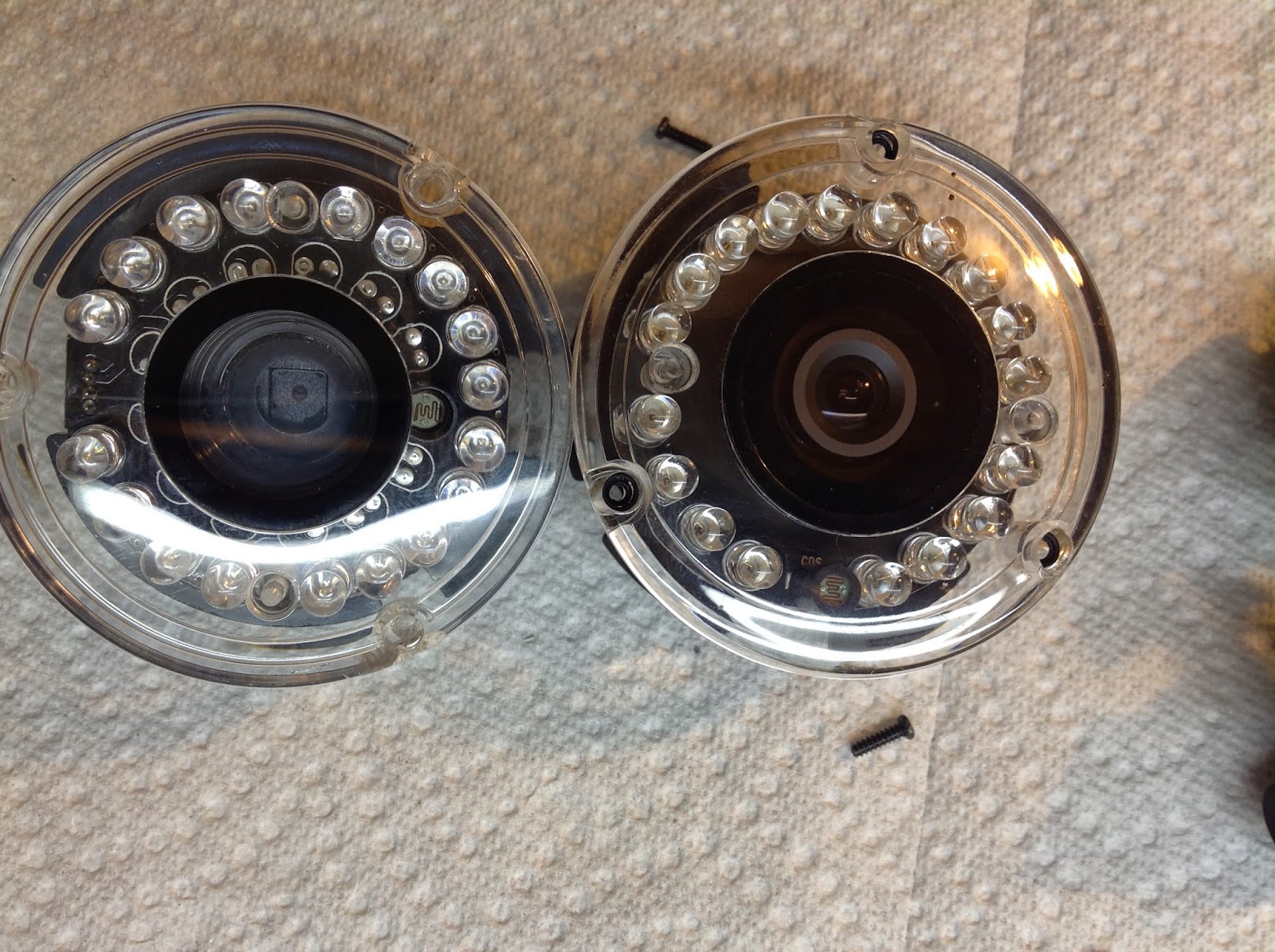 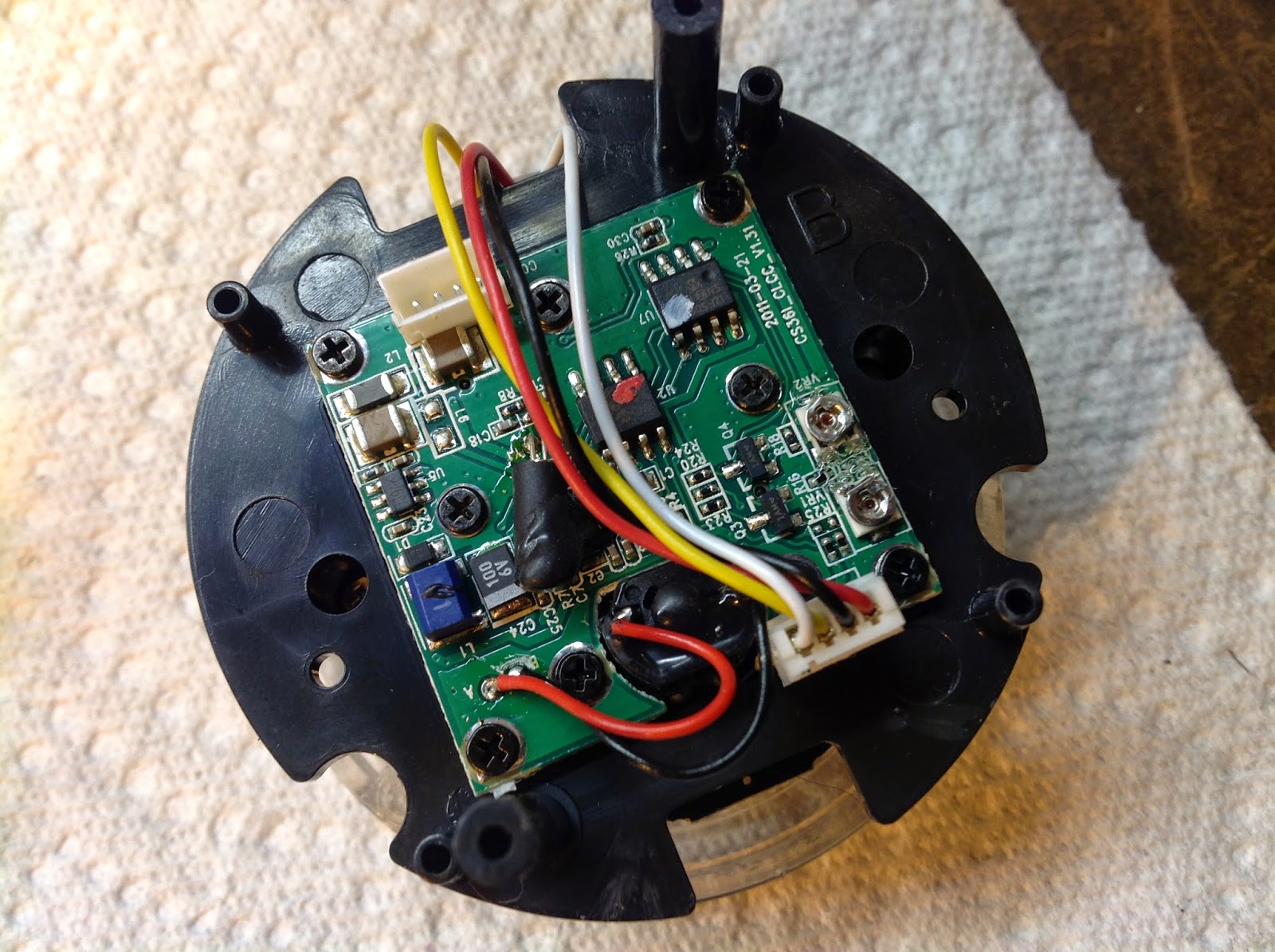 Here is the back of the 50 degree camera.  Prominently missing is the white plastic piece, which is a heat sink.  That heat sink on the 90 degree cameras makes a huge difference in night vision performance. 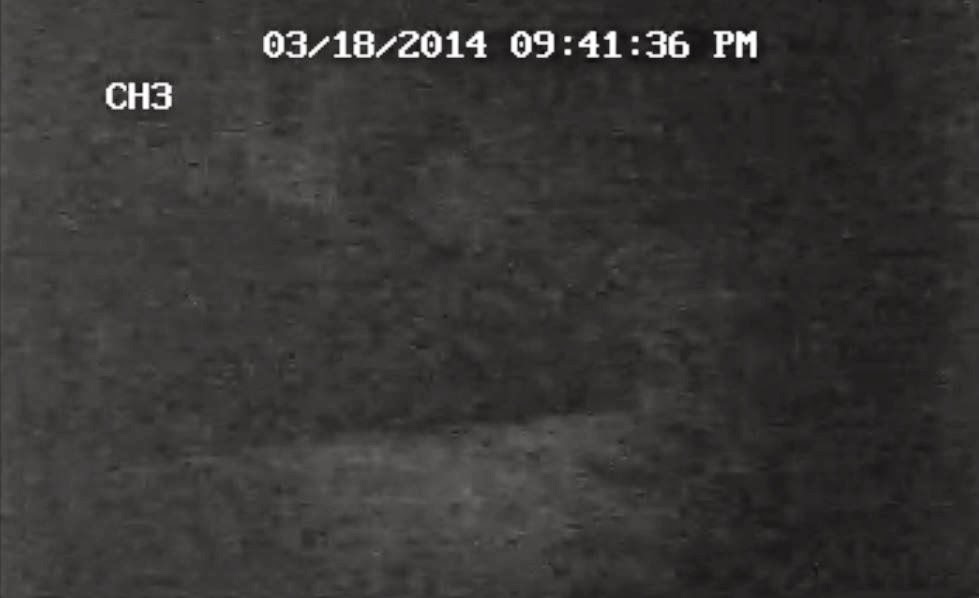 Daytime performance of the two cameras is similar, but I prefer the wider viewing angle of the 90 degree camera. 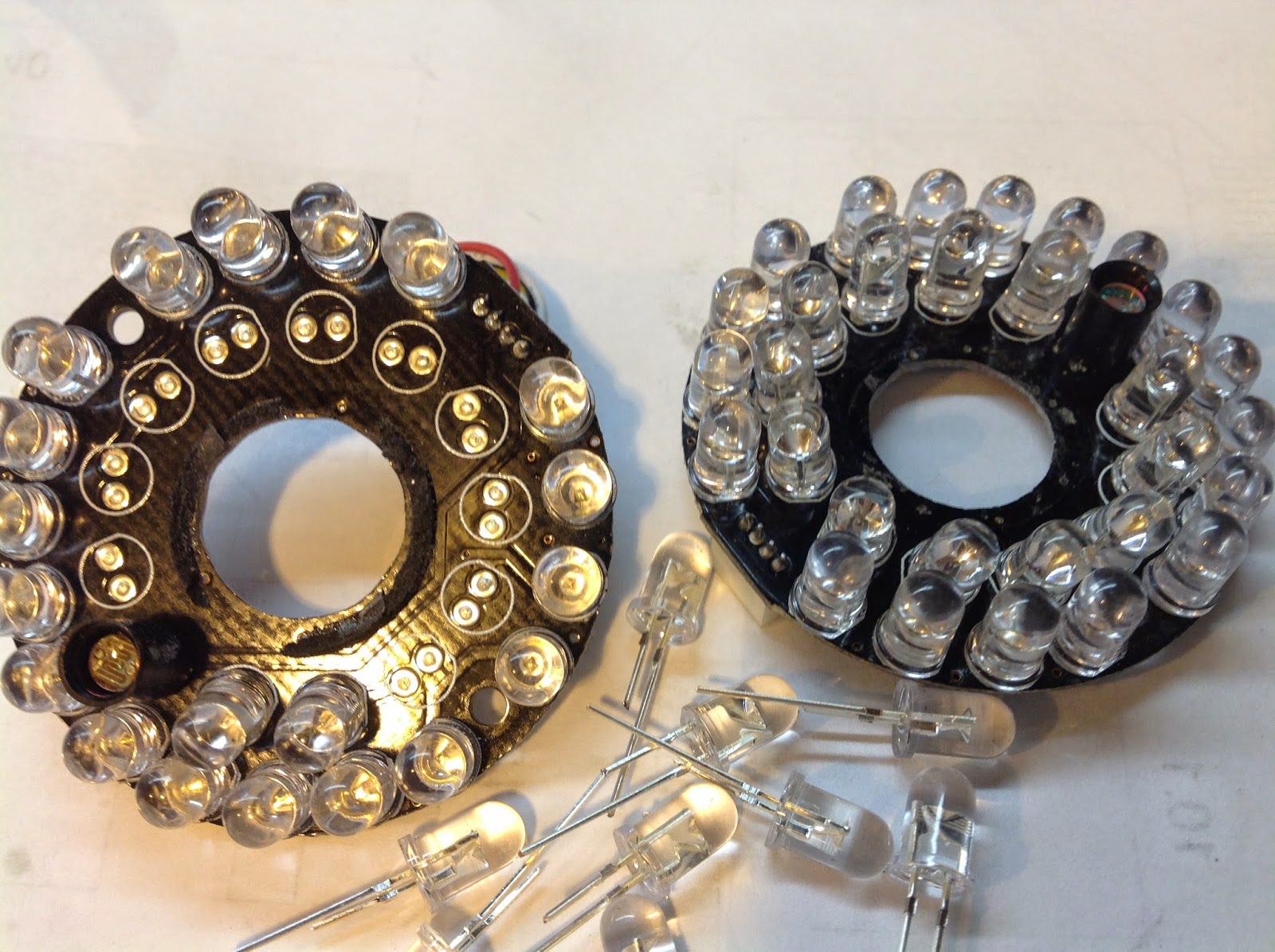 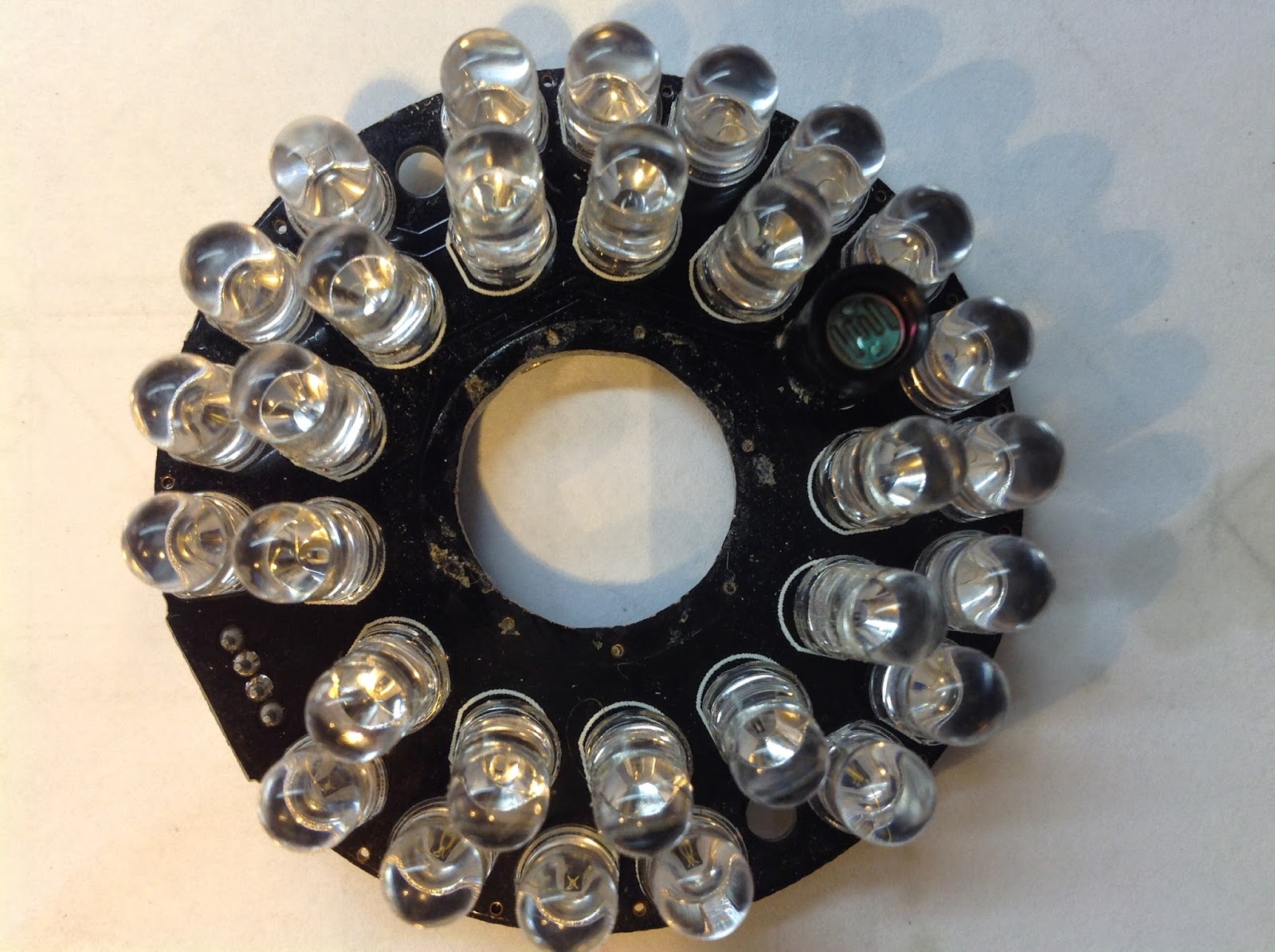 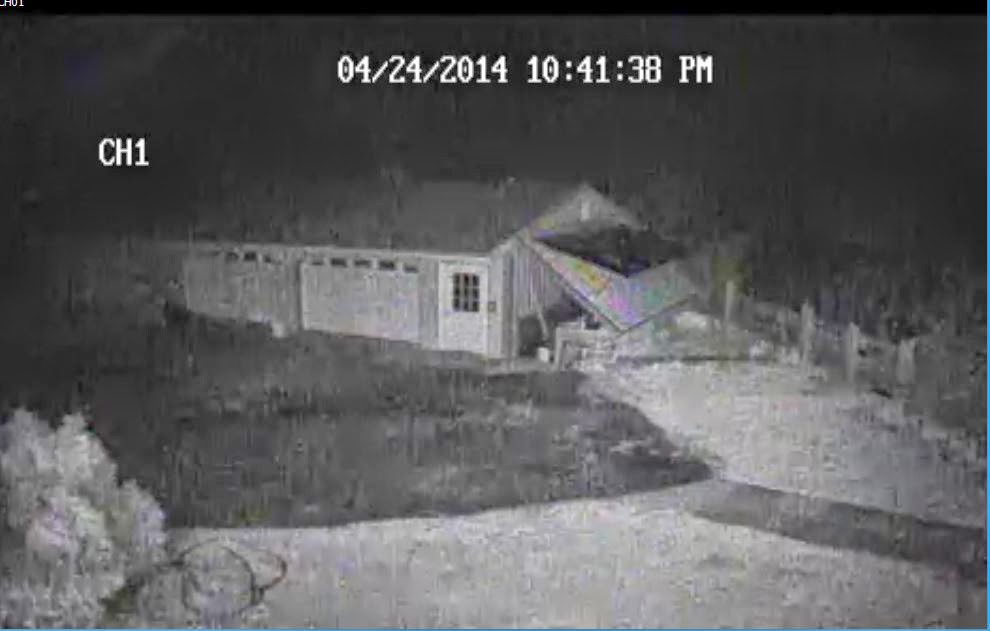 The 50 degree cameras had IR LED boards that could hold 30 LED's, but only had 18.  The 90 degree boards have 18 LED's and no extra holes. I decided to experiment, and I took one of the 50 degree boards and added 12 more LED's. These LED's I mounted at an angle to reduce the bright spot in the center of the night view.  Notice in the picture below how the LED's are angled out.


I installed this board in one of the 90 degree cameras, and it made a huge difference.

Compare this picture to the other night pictures. It is unfortunate that Lorex did not use 30 LED's for they would have a much better product.