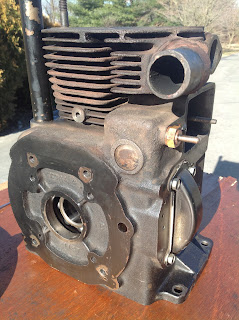 After 35 years of reliable operation, the Kohler engine in my John Deere 316 was beginning to burn a little bit of oil.  About a quart every 3 or 4 hours.  So, I decided to overhaul it and bought a kit which included a new piston, connecting rod, and valves.  Step one was disassembling and cleaning the parts. The engine was much dirtier on the outside than on the inside.
I stripped everything out except the main bearings.  Since most of the bolts were oil covered and a little loose when I removed them, I cleaned every bolt and their corresponding holes.

How do you remove the cam?  The cam rides on a shaft that is about 1/4" diameter.  It goes in the black hole to the right of the crankshaft hole in this picture.  Drive the shaft out from this side with a soft punch. 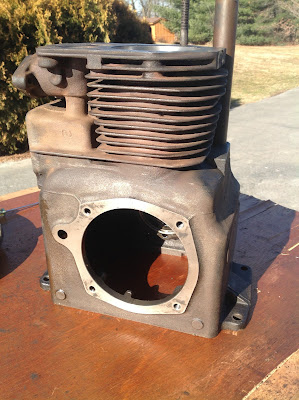 This is a solidly built engine, and weighs somewhere around 90 pounds when assembled.  Once disassembled, the bare block was easy to pick up and turn over to clean. Surprisingly, every internal part measured equal to new specifications. With the exception of the piston and rings, there was no measurable wear on the crank, camshaft, cylinder bore, and valve lifters. This was good news in that it was not necessary to bore the engine and use an over-sized piston.

The camshaft shaft will come out of this hole. You should not have to hit the other end of the shaft very hard. 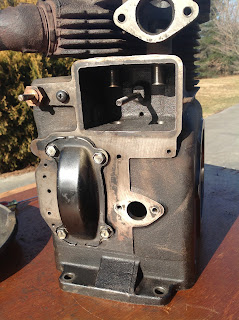 The valve guides also had no measurable wear.  I have no idea of the total time on the engine, only that I put on 400 hours since I bought it in 2002.  Since the tractor had signs of considerable wear when I bought it, I'm guessing that it had about 1,000 hours on it, so maybe it has 1,400 total.

This engine does not have the balance gears present in some versions, and from what I've read, generally discarded by engine overhaulers.


I decided to replace the governor gear, even though like everything else, there was no wear visible.  However, the gear is plastic, and I once had an 18 HP Briggs & Stratton self-destruct because it's plastic oil splashing gear failed.  Since a governor failure could result in a destructive overspeed, I felt it was a good idea to change it. 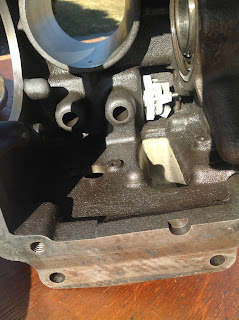 However, that greatly complicated the rebuild, since I had to remove the camshaft to access it. As you can see in the picture on the left, it is located deep inside the engine, above the camshaft. Removing the camshaft requires removing the bearing plate, along with the crankshaft. 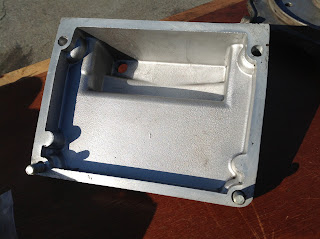 There was no sludge inside the engine, and the
oil pan was one of the easier parts to clean. The front main bearing. these massive ball bearings were in great shape. 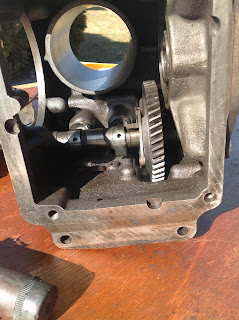 Finally, the fun part.  Reassembly. Here is the camshaft installed, and note how the governor gear is not even visible anymore. 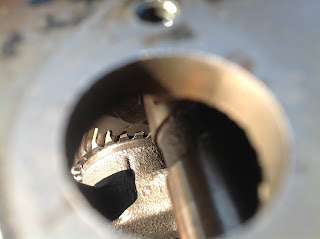 The timing marks are hard to see.  Here is a view through the fuel pump opening.  The tiny dot on the cam gear lines up with the line cast into the crankshaft.
These pictures were taken with my iPad, which has an impressive ability to selectively focus exactly where you want it to.  The iPad was also useful for reading the rebuild manual. 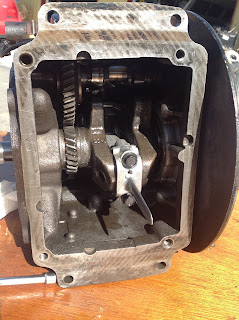 The crank and connecting rod installed. 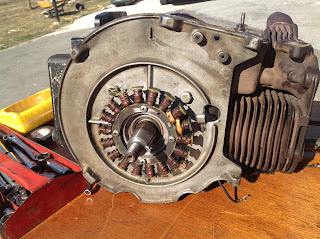 The alternator coil and bearing plate.   Once again, this engine was very tight, and I had to use all three paper spacers to get proper clearance between the sides of the bearings and the crank.
The book specifies 35 ft-lb for the bolts holding the side plate, so I torqued them to 35, and one of the bolts snapped, while I could feel another stretching. Fortunately, I was able to remove the broken bolt without difficulty. However, I was bugged by this, for I then realized that the soft bolts used were only good for around 24 ft-lb.

I decided to replace all the bolts with high strength bolts and torque them to 35 ft-lb.  Since the overhaul manual is about 15 years newer than my engine, maybe they upgraded the bolts. In any event, if your engine has bolts like the one on the left, with the recessed top, don't torque them to 35.  Better to throw them out and buy new ones. 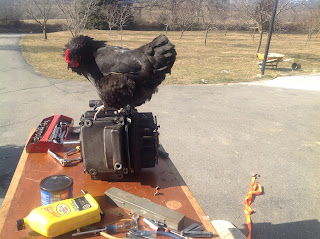 With difficult jobs like this, any help is welcome.  Well, almost any.  I had just installed the flywheel when my feathered friend jumped on top of it.  She is a very social chicken, and is always nearby.  But this surprised me. She spent a few minutes inspecting my work before jumping down. 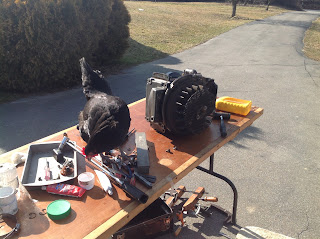 I installed the engine in the tractor with only the flywheel attached.  Not having an engine lift, I wanted to keep it as light as possible.  It was also easier to torque the head when the engine was solidly bolted down. 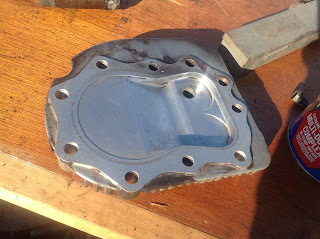 The head had a huge amount of carbon, but I don't believe it was ever removed for cleaning.
It polished up nicely. 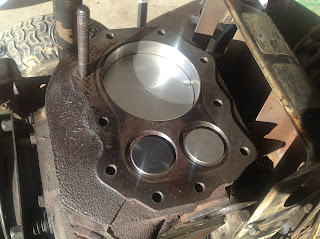 The new piston and valves.

The engine started right up, and ran well.  It has 6 hours on it now, and appears to be breaking in properly.

The entire job took about 24 hours from first removing the hood of the tractor, to reinstalling it. 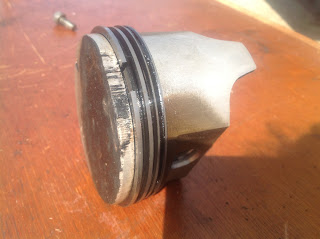 The original piston.  Badly scored by carbon which had built up on the cylinder wall.  This was the only part in the engine that showed serious wear.  This piston design is no longer used, and the newer one has the piston rings located higher up.  That should reduce the amount of carbon that can get trapped above the rings. 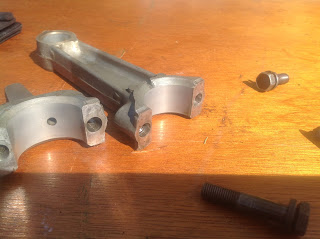 The original connecting rod.  It was good enough to re-use, but a new one came with the rebuild kit. 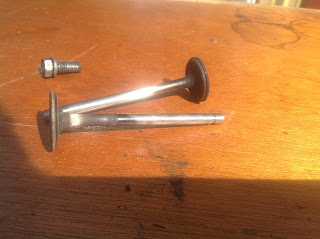 The original valves.   Some erosion can be seen on the exhaust valve stem, but otherwise they were in good condition.
Posted by Robert at 8:14 PM