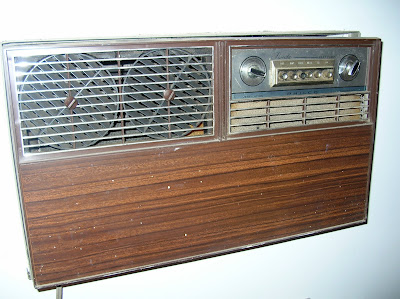 Ok,.so.what makes a Philco heat pump Blogworthy? For one, it is a Genuine Philco, and I love all things Philco.  Second, it is one of the earliest examples of a residential heat pump you will find anywhere. Third, it is approximately 45 years old and still runs great.

I'll admit the age is a guess.  It was made after Ford's acquisition of Philco in 1961, but before Philco was renamed Philco-Ford Corp in 1966.

Whether it was 1962 or 1966, it is a remarkable achievement in longevity and reliability by a very well-engineered Philco product. 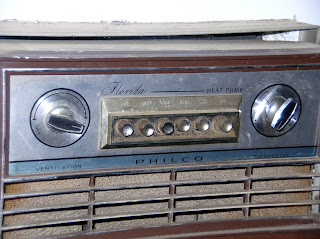 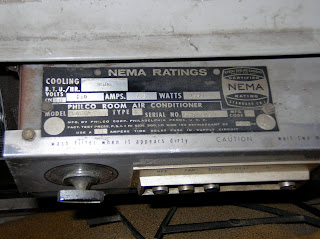 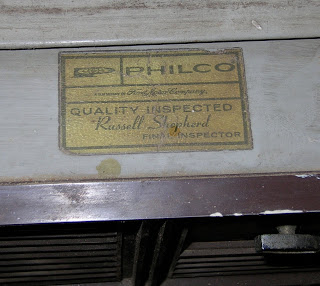 I acquired it about 14 years ago from friends who bought an old house which included the Philco. They used it until it quit from a failed capacitor, a $6 part.  Knowing my affinity for Philcos, they gave it to me. It sat in my garage for 12 years, patiently waiting for the day when it would once again pump heat.  That day finally came with the completion of my workshop.  After a thorough cleaning and replacement of the capacitor, the compressor rumbled to life after it's Rip Van Winkle slumber. Soon, it was pumping out 9500 BTU's of cold air.  Back then there was no such thing as EER ratings, but it calculates out to 6.1, typical of the era.  I'm not sure how to calculate efficiency as a heat pump, but it is very effective above 40 degrees F and OK as low as 32 F.  In both modes, it effectively conditions my 576 square foot workshop.
The heat pump is hardly more complicated than a conventional air-conditioner.  There is one solenoid valve to reverse the Freon flow, and that's about it.  Apparently by design, the solenoid releases all pressure (with an audible hiss) when the thermostat cycles in heat mode. this appears to be necessary, for the thermostat cycles more frequently than it does in cooling mode.   Those who were interested enough to read this far may be interested in another unique design attribute. The airflow,  both on the evaporator and condenser sides, is reversed from the norm.  Inside, the fan pushes through the evaporator, which is tilted back instead of vertical. This insures that condensation does not dribble out the front.  Outside, the fan draws through the condenser and then blows the warm (and potentially moist) air over the compressor. At first I thought that somehow the fan was spinning backwards, but that is how it was meant to run.  And, after 45+ years of dependable operation, who am I to question Philco's engineering?
All in all, a nice design that was apparently ahead of it's time, for heat pumps did not become popular for several more years.

Update:   It is now in it's third year of operation in my workshop, and continues to do a fine job.  The great heatwave of Summer 2011 has made working outdoors unbearable.  Yet even with 100 degree temperatures outside, it was a comfortable 78 degrees inside. A good performance, considering the workshop is a steel sided garage with only one inch of foam insulation, and was baking under intense sunshine all day.
Posted by Robert at 5:29 PM