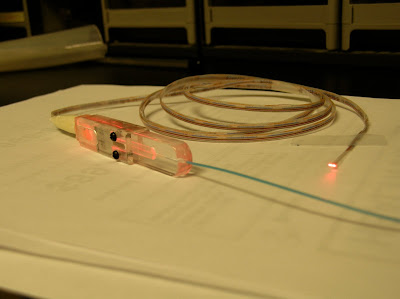 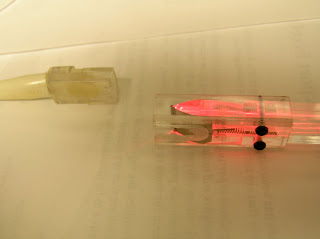 A few years ago, I developed a prototype phone jack that used up to 8 optical fibers instead of wires. Unfortunately, the design was never used, but I think it is a pretty cool design, anyway.
One end was a standard phone jack that I hollowed out and installed one of our polymer waveguide connectors attached to a fiber ribbon.
The other end was a receptacle of my own design.

Using optical fibers presents some challenges not encountered with electrical connections.  Primarily, dirt contamination and eye safety.  My connector solved both in a way that I feel was superior to other designs. 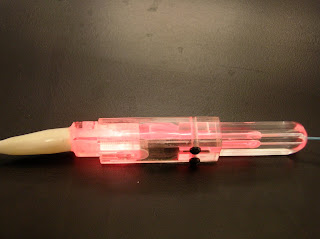 I created a clamshell arrangement that opened when the plug was inserted.  An important feature of my design is that the clamshells moved back and away from the optical connector.  This ensured that dirt would not be pushed in, but pushed away instead.
When the plug was removed, the clamshells closed tight, preventing dirt from entering and light from escaping.  The clamshells were recessed deep into the housing, making them difficult to tamper with. 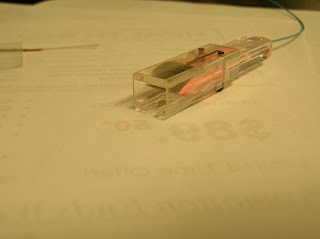 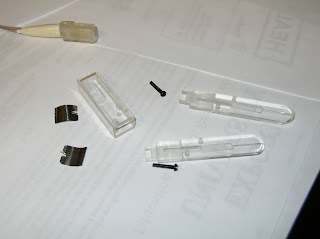 The connector body was easy to fabricate and had few parts.  Internally, for demonstrator purposes, it had one of our polymer 1x8 splitters instead of 8 optical fibers.  That is why you see only a single fiber on one side.

Overall, a nice design and a good demonstrator for our waveguide business, but we were not a connector manufacturer and did not commercialize it.
Posted by Robert at 12:57 PM