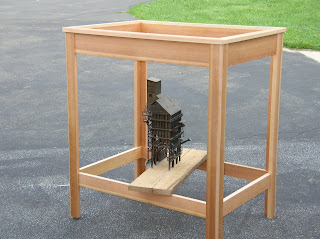 My brother Stan is an avid model railroader and a member of the National Association of S Gaugers. (NASG)  Recently, one of his good friends, Wally, had to retire to live with his son and sell his home of 50 years, where he and his wife raised their family.  During those 50 years, Wally slowly built an elaborate model railroad in his basement.  Sadly, the railroad could not be salvaged and had to be demolished before the house was sold.  Stan decided to preserve a piece of it in the form of a tabletop display. My job was to make the table. 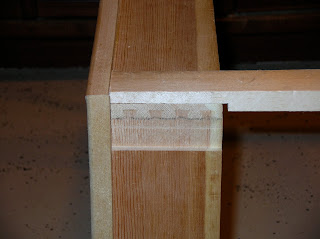 I had several requirements for this table. First, it had to accommodate the centerpiece of the display, Wally's 40 year old hand built coal tower.  Then I decided that I wanted to give Wally as much flexibility as possible, not knowing just how much room he has in his new quarters. So, I made the table convertible.  The display could be either on top, or below with a glass top.  That way he could use it as a conventional table, if need be.

Since the table was merely an open frame, and corner braces would be unattractive, I had to design very strong joints.
I began by making the upper and lower frames, using dovetailed joints. The corners were also notched using a dado blade, as were the legs. 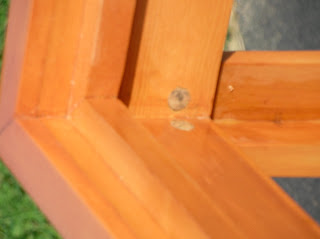 This created a strong locking joint that was very stiff in all directions.  In fact, it was reasonably sturdy with no glue at all.  That is exactly what I needed.  I did not want to rely on the glue for strength.  Neither did I want to resort to nails or screws.  Instead, 2 short dowels in each corner lock the legs in place.  Another reason it had to be strong is that it needs to survive a trip from Pennsylvania to Illinois. 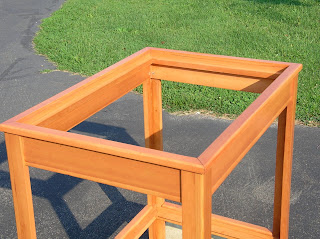 The completed table.  It is made from 40 year old clear pine that Wally had in his basement.  Years ago, he turned his basement into a recreation room with pine paneling. He had some beautiful boards left over.  12 feet long, 12 inches wide and nice, tight grain.

Try to find something like that today.
I'm sure Wally will appreciate it even more, knowing it is made out of his wood. The boards had a distinctive stripe that I matched up around the sides.  I like the effect.

All that is needed now is to carefully box up the buildings and complete the shipping crate.

I hope Wally, who is now 90, will enjoy it for many years. 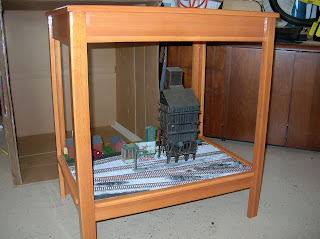 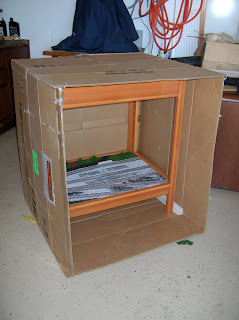 Email ThisBlogThis!Share to TwitterShare to FacebookShare to Pinterest
Solar Hot Water I