With the popularity of online shopping today, one would think that the Receivador would come back in vogue. 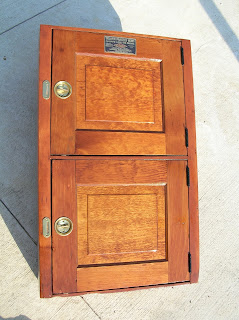 Ever hear of a Receivador?  Neither did I, until a neighbor threw one out.  Thinking it might have some restoration potential,  I immediately rescued it from the trash.
Naturally, the cabinet did not look like this.  Rather, it looked like it belonged in the trash. Painted battleship gray and reeking of motor oil and paint thinner, it was in bad shape. To compound things, it had numerous arrow holes!  Low power practice arrows fortunately, from my neighbor's daughter's childhood hobby.  The interior of the garage made a great backstop, but the poor Receivador took a beating. Look closely at the picture below and you will see the arrow marks.
I decided that the only way to restore the cabinet was to take it apart and turn around as many of the damaged pieces as possible.  That is how the arrow holes and gray paint ended up inside.
I elected not to totally remove the paint, to preserve some of the cabinet's history. 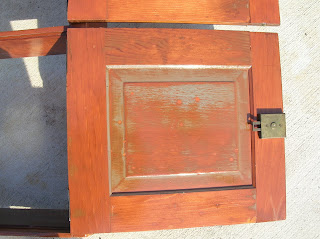 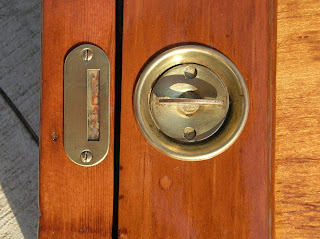 Fortunately, the interior door panels were in beautiful condition, and I only had to worry about the parts with the locks.  These could not be turned around, so some arrow marks remain on the front.  That is one below the solid brass latch.  The brass plaque in the frame has a window, in which you can barely make out the word "Vacant". It can also say "Full".
At this point, you are probably wondering what a Receivador is! The Receivador was a clever 1920's innovation for residential package delivery. It mounted through the wall, and had doors on both sides, with interconnected locks. A deliveryman could put a parcel in from outside, but could not see into the house. Once he closed the door, it locked automatically and the indicator would change to "Full".  When the homeowner opened his side, the lock would reset for the next delivery. 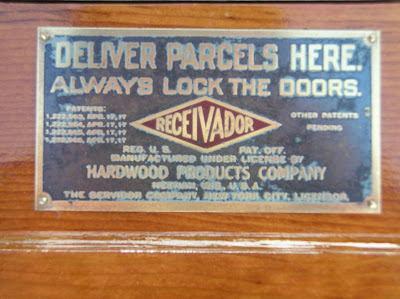 Sadly, on my unit the inside doors and lock mechanism have long been discarded.  My guess is that happened about 60 years ago, which is when I believe it was removed during some remodeling job and converted to a lowly garage cabinet, suffering the indignity of leaking oil cans and arrows before being unceremoniously tossed in the trash.  Now, with it's brass hardware gleaming once again, it hangs proudly on the wall of my workshop. A relic of the past, it lives on to teach future generations the answer to that great mystery of the ages:  "What is a Receivador??"

This cabinet is for sale!  Make an offer at "robertchristinemail@gmail.com"
The cabinet has been sold, and is now living a new life as a bathroom cabinet, which is an ideal use for it.
It has now lived 4 lives.
circa 1930 to 1950: Originally installed in Philadelphia or Chester PA
1950 to 2008: A garage cabinet in Glenolden, PA
2008 to 2015: Restored and installed in my workshop in Cochranville, PA.
2015 to present: A bathroom cabinet in a house near Allentown, PA
Posted by Robert at 4:44 PM