When my brother Stan fell ill, all my projects came to a halt.  However, Stan would not want me to stop.  While I'll never again use the lathe and mill to help him with his model railroad, there will be other projects.  Therefore I have picked up where I left off, and am in the process of adding digital readouts to my Mini Lathe.  Already heavily modified - see my Feb 18, 2010 post - the DRO will enhance it further. 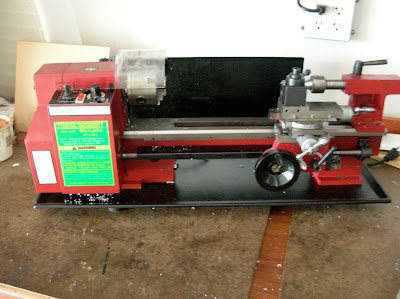 Adding the scales to the lathe was more difficult than the Mini Mill because there was a lot less room to work with.  The cross-slide scale just barely fit by laying it flat on it's back.  It blocks the gib adjustment screws, but is easily removable should they need adjusting. 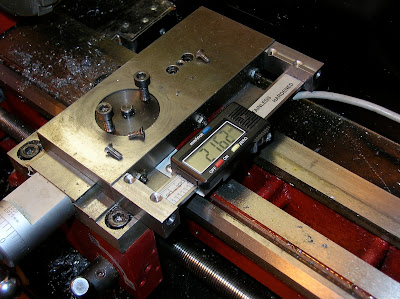 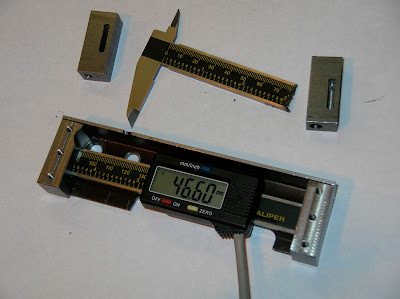 It extends past the compound slide in both directions, but does not interfere with the hand crank or the toolholder.  Like the cross-slide scale, it has to be removed to adjust the gibs, but removing only takes a few minutes. 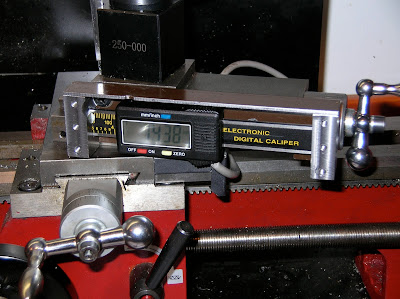 Next task is adding a scale to measure carriage travel.  This will use a 12" long caliper and be mounted below the carriage, on the lathe table.
After a lot of thought about how to best add the carriage scale, I designed the mounts seen below.  They fit snugly underneath the lathe bed, and use a pair of 8-32 screws to secure them in place. After machining them, I hand-filed them in spots to make them conform to some irregular spots in the sand-cast bed. 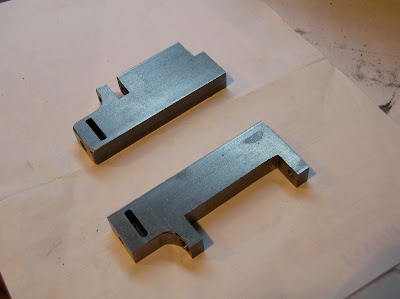 Pictures of the brackets installed.  They fit nicely, and accurately hold the scale beam in alignment with the lathe bed. 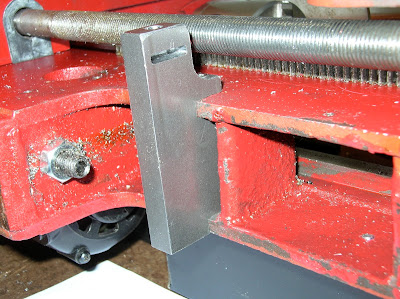 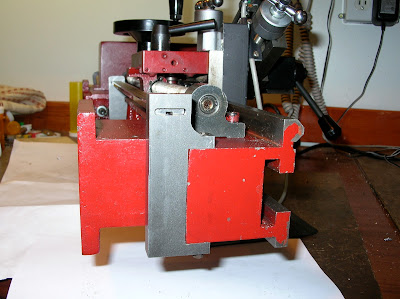 Picture of the scale beam installed: 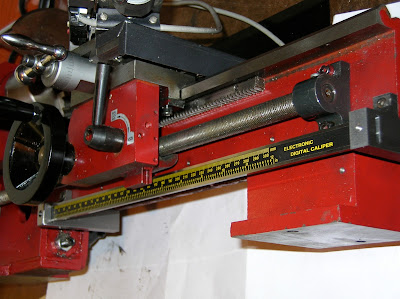 Next step: Make a bracket to connect the scale head to the carriage.  This led me down a different path for a while, for when I disassembled the carriage,  I saw the need for several improvements.  One of the "problems" with these lathes (and mills) is that they offer many opportunities to improve them, and turn an OK machine into a very good machine.  For example, in the above picture, the half-nut dovetail can be seen protruding far below the carriage.  I decided to fix this and make other improvements, which I will post separately.  Then I will return to the scales.  See http://robertsprojects.blogspot.com/2011/02/more-mini-lathe-improvements.html for the rest of the story
Posted by Robert at 1:13 PM