One of my jobs is assembling polymer optical waveguides in packages which will then connect accurately to MT format fiber optic ferrules.  Below is one example.  I installed 4 waveguides on this board with ferrules to connect to ribbon fibers with MT ferrules.  A ribbon fiber is installed on one of them. 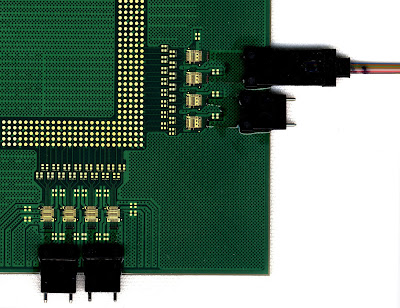 I often make small waveguides with fibers connected on both sides.  Below are some of those wave guides.  They are 10mm long, but will be trimmed to 8mm when complete. The extra 2mm aids in assembly and alignment. 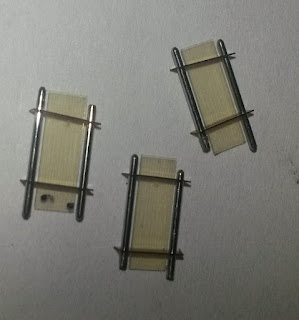 To work efficiently, the waveguides must be accurately aligned between the pins to ±1 micron. In large volumes, we laser cut the parts to fit with micron precision.  However, in small volumes, it is more cost effective to cut them manually, and then align them under a microscope.  In the picture below you can see the waveguides inside the plastic sheet.  I designed an alignment tool to position the waveguides and hold them while the epoxy cures. 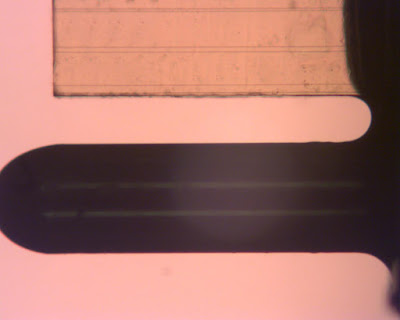 The tool works by gripping the waveguide film with a pair of sharp points which are then moved to position the film accurately. 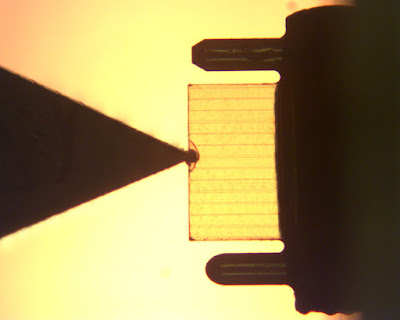 After the epoxy is cured, the pins are removed and the ends of the waveguides are trimmed and polished on machines I modified to better suit my requirements.

Here is a close-up view of the end of the waveguides. This is from a part that I connected fibers to using an MT ferrule.  I epoxied the parts together and then separated them after testing was complete.  The circles were created by the fibers, and serve as proof that the alignment was good. 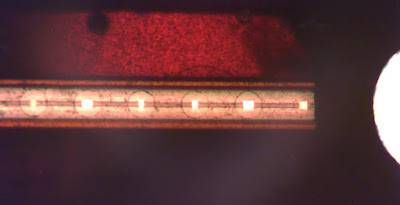 Here is the tool. In the first picture, the clamp is lowered to hold the waveguide assembly in place, and in the second picture the clamp is raised so that the finished part may be removed. 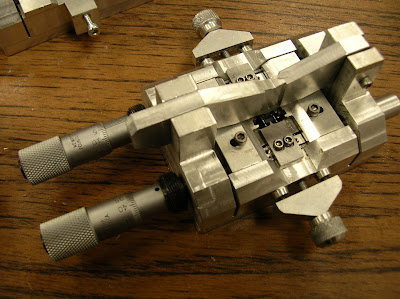 The tool has 4 adjustments.  The two knobs on the sides move the points in and out to grip or release the film, while the two micrometer knobs are used to position the film in between the pins. 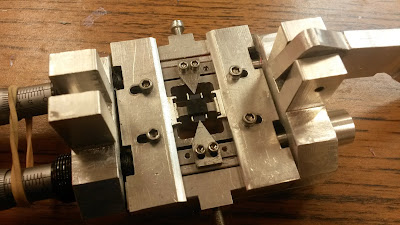 Alignment is done visually using a Wild macroscope equipped with a translation stage with digital readouts.  With care, accuracy of ±1 micron can be achieved. 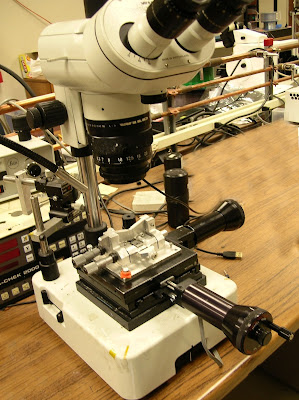 The alignment tools fit in a base designed to hold the tools accurately, even when removed and replaced. This permits a higher volume of parts to be assembled, as multiple tools can be placed under the microscope, aligned, and then removed while the epoxy cures. 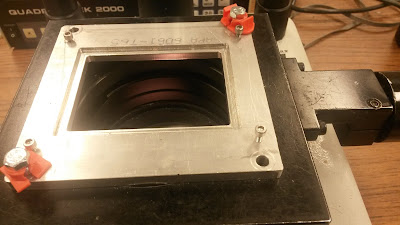 Daily throughput is increased by making multiple copies of the tools, which are easy to reproduce. 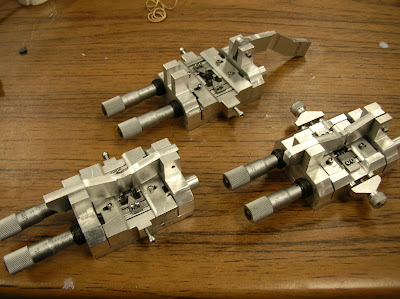 These are a good example of the accuracy that is possible on a modified Harbor Freight (Seig) Mini Mill.  Each bottom plate has 18 counter bored 4-40 holes, and the parts attached to the bottom plates have threaded 4-40 holes.  All of the parts are accurate to within ±.025mm, and are interchangeable. 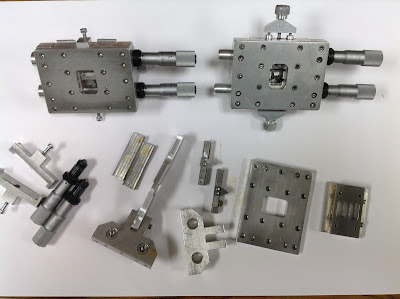 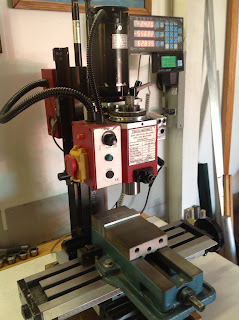 I developed another set of tools to align optical waveguides to VCSELS and detectors. Here is an array of 4 detectors coupled to a polymer waveguide with a mirror on the end. This technique uses a unique active alignment scheme that did not require the circuit to be powered up. 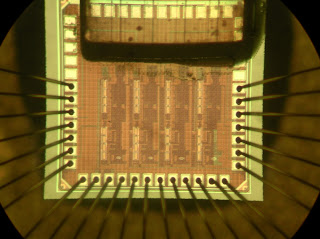 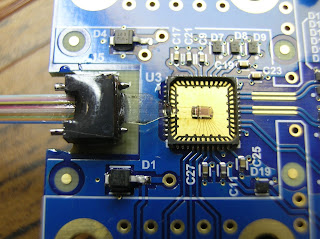 Posted by Robert at 12:11 PM No comments: Links to this post