While my John Deere 316 and overhauled mule hitch are now in fine shape, the 46" mower deck is not.  Some of the mower bearings began to fail, and I decided to replace them all.  When I removed the deck and began disassembly, I discovered that the deck was badly rusted.  Now the bearing job turned into a major overhaul.  I removed the loose rust and and sprayed the badly pitted surface with a rust converter, then painted it.  While the paint adhered well, I did not like the pitted surface, which looked like it would be difficult to keep clean.  So, I filled the pits with auto body putty and re-sanded the whole thing.  These two pictures were taken before I filled the pits. 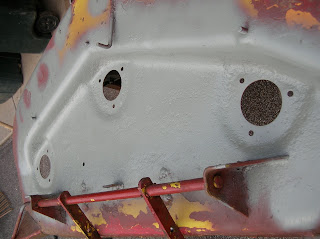 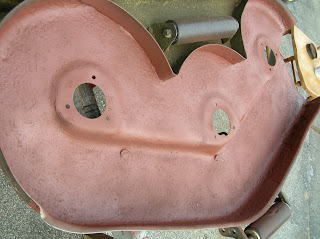 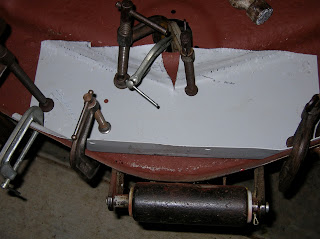 Unfortunately, some of the worst rust damage was in the vicinity of the front roller and mule hitch attachment points.  Not surprising, since this area quickly fills with wet grass.  I cannot afford to have this area rust anymore, and decided to make a reinforcing patch which eliminates the corner and protects the critical areas from grass accumulation and hopefully, more rust.  The blade has about an inch clearance, which should be enough while preventing grass buildup. 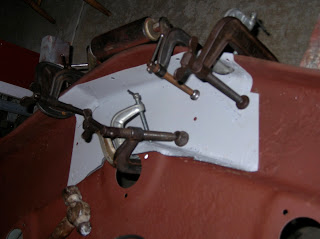 The patch is 0.10" steel, about the same thickness as the mower deck.  After cutting and bending the rough shape, it was easy to pound it into a form fitting patch.  It is held by 10 5/16" bolts and is easily removable for inspection.   Satisfied that I had a good solution to the rust problem, I turned my attention to the bearings.  They were, not surprisingly, difficult to disassemble.  The nuts on top of the pulleys can be very stubborn.  I removed one with great difficulty, only to discover that I damaged the threads on the shaft.  See right end of top shaft.  Fortunately, it is still use-able, for replacement shafts are around $45! 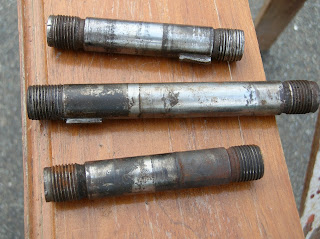 Next nut I did the smart thing and cut the nut in my milling machine.  Now it spun off easily, leaving undamaged threads. Replacement nuts are only $3, much cheaper than a replacement shaft! See cutout in my old nut, and notice that the new one is a vibration proof crushed nut.  The old one probably was, too.  That is part of the reason they are difficult to remove.
Note:  All nuts are standard thread. 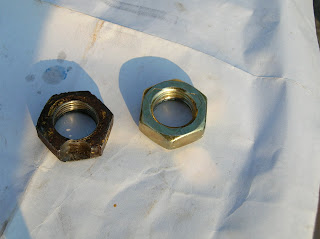 I begin disassembly by removing the nuts at both ends, an then the snap ring that is exposed when you remove the round nut under the mower blade.  I use a pipe wrench to turn the round nut, but be careful, for I believe this nut is cast iron.  Whatever you do, don't hit this or the shaft ends with a hammer.
See snap ring in this picture.  Only the bottom bearing is held by snap rings.  I leave the inner snap ring alone.  No reason to remove it. 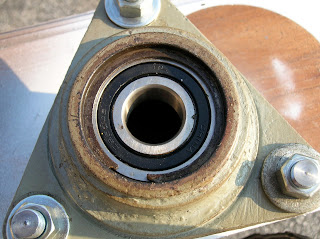 Now press on the shaft at the pulley end.  If all goes well, the shaft will push through the pulley, and this bearing will pop out.  Remove the pulley and press the shaft's blade end, while using a block to prevent the lower pulley from going back into it's hole.   The upper bearing and shaft will now pop out the top, and the lower bearing is now free.
I found every key locked solidly in place, so I didn't bother them.  Instead I pressed the upper bearings down and off the bottom of the shaft.
not having a hydraulic press, I pressed them off in my industrial sized Athol vise, made by the Athol Machine Co., which apparently was bought out in 1920. 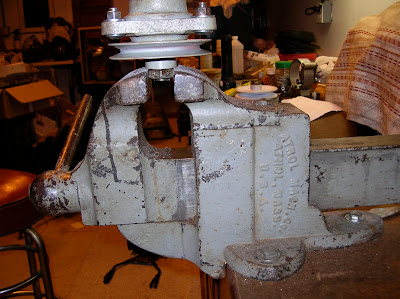 Not sure how much longer Athol brand vises were sold after that, but I'm guessing mine is anywhere from 1900 to 1930.  It is a very rugged vise that opens up to 8" and has an unusual handle with a dog clutch in it.  Pull towards you and you can reposition the handle anywhere you wish. Unfortunately, my clutch is worn and slips, so I have it locked most of the time.  For arbors to press against, I use my Harbor Freight deep impact socket set.  They press against the bearing in the right places, without damage to them of the bearing 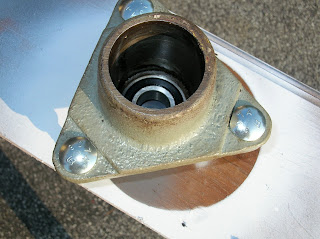 I replaced all of the hardware with new 3/8" bolts.  The originals were 5/16", and the more rusted ones turned inside the square holes.  That makes them very difficult to remove.  Once I had them out, I realized that the holes were nearly a perfect fit for 3/8" bolts. Only a small amount of filing the square holes was necessary, along with filing a slight flat on the heads to clear the step in the casting. These bolts will never turn in the square holes, no matter how rusted they might become.

More bad news.  One pulley was badly rusted and 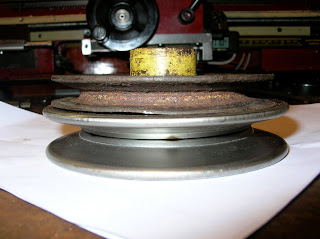 needed to be replaced.  New ones from John Deere are about $30, and used ones are, in my opinion, overpriced at over $20.  As much as I like this old John Deere, I try to avoid putting more money in it than I have to.  Hard to justify a $30 pulley on a 30+ year old, and rusted mower deck.   Looking at the selection of pulleys at Tractor Supply, I came up with an $8 solution.   I could turn down the rusted John Deere pulley in my lathe, and then attach a Weasler pulley to the John Deere hub.  Weaslers are inexpensive because the hub is bought separately.  But I didn't 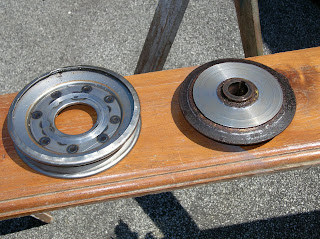 want the hub anyway.
Above right:  The rusted 4 1/2" inch John Deere and the 5" Weasler.  While they look very different, where the belt rides is nearly identical, and that is what matters.
At left, the old John Deere with the rusted half removed in the lathe, and the new Weasler pulley. Now, simply attach them together.  They fit almost perfectly, with the John Deere nestled under the rolled edge of the Weasler, which I then pounded tight over the edge of the Deere. 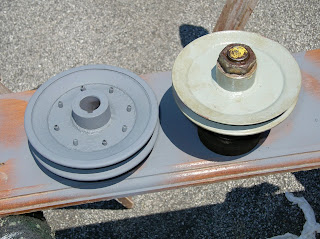 At right, an original John Deere, and my Weasler Deere pulley. 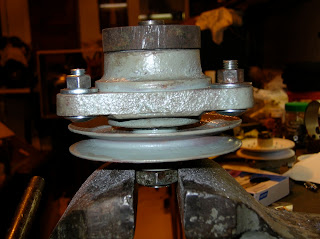 When something fails prematurely, like the lower bearings did - they were less than 10 years old, I analyze it and look for a fix.  In this case, the round nuts, which are supposed to protect the bearings, had too much space between them and the spindle. There was about .015" - .020" of space, which let things like bits of bailing twine get wrapped around the shaft and eventually destroy the bearing seals, causing the bearings to fail.  I machined the back of the nut to allow them to be closer, about .005".  See the tight gap in the photo at left.  Since each spindle is a little different, the nuts are no longer interchangeable, and must be returned to the spindle it was on. 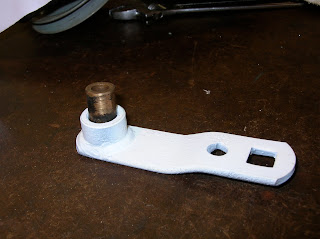 The idler pulley arm has a brass bushing that is easy to miss.  I didn't notice it at first under all the dirt and corrosion.  It is worth the effort to remove it, clean it up and lubricate it.

Meanwhile, I continued to work on the deck.  Filling some of the larger rust pits made a dramatic improvement, so I filled some more.  It was really starting to look good! I repeated the process once more, re-sanding each time.
I used a can of John Deere Top Sail white I had on hand as the finish coat.  It is some of the nicest spray paint I've ever used, much better than the quick drying hardware store brands. The high gloss finish almost has a wet look appearance to it. 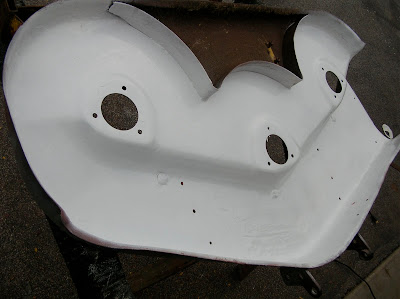 There is actually very little putty on the finished deck.  I sanded until I had a surface of shiny metal and filled pits.  The putty adhered well to the pits, which were treated with the rust converter.
I'll give the paint a few days to cure before assembling the mower.  Unfortunately, there is no need to rush, as the heat wave has turned my fields brown. 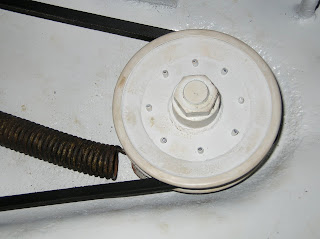 Finally, the time has come for reassembly. First question.  Will the Weasler work?  It fits nicely on the left side, but the spring has to be installed carefully, for the clearance is very close, about .010".  There is plenty of room to get the belt on.
It was a tight fit on the right side, and rubs a little. Also, the spindle has to be loosened to replace the belt.  Fortunately, I needed only one replacement pulley. 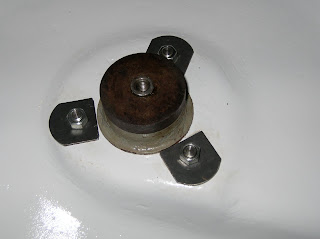 I made over-sized washers out of  0.10" steel, for the region surrounding each bolt hole was distorted into a concave shape.  These should prevent that from happening again.  I also epoxied them on place to prevent rust from creeping under them. 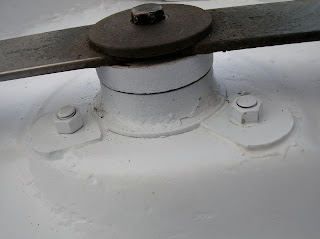 Below:  A close up of the edges of the patch.  A very close fit with no sharp edges to cut through the paint on the deck. 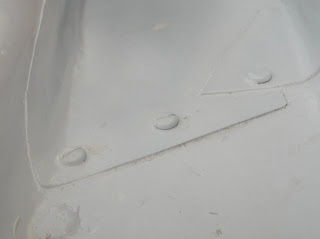 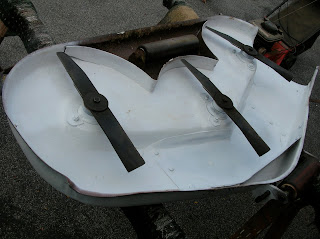 No more deep, grass accumulating corner, plenty of clearance, and easy inspection of the critical areas where the brackets are welded on. 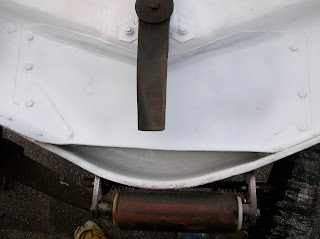 A view of the installed deck.  I still have to restore and install the covers over the pulleys. White, instead of John Deere yellow, is the finish color, because I had white paint on hand. The previous owner painted the tractor frame and mower red.  Apparently, he had plenty of red paint on hand! 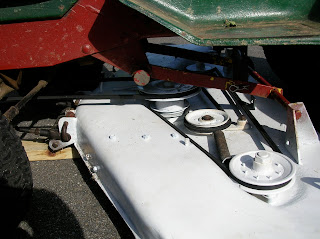 Visitors have come to this site for instructions on removing the deck.  It is simple, no tools needed. First, put a 2x4 under the front roller to take the weight off the mule hitch.  Loosen the belt adjustment knob and remove the belt.  Pull the spring-loaded J hooks by the front roller towards you and rotate them clear of the mule hitch.  The mule hitch is free now and may even fall off. Pull it forward and remove it from the tractor.  Next pull the retaining pins out of the links which raise the deck. In this picture, the link and pin are directly over the belt where it stretches between the two outside pulleys.  Finally, pull the round knob visible in the center of the picture and rotate it counterclockwise.  It should rotate into a slot which keeps it in the open position.  The links will likely drop free at this point.
Here is a view under the deck after mowing 2 acres.  Only a small amount of grass has accumulated, a big improvement. No, the blades are NOT spinning!  I'm not sure why it appears like that other than it happens to fall  on the dividing line between the bright sunshine in the background and the dim lighting under the mower. 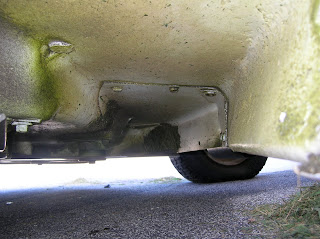 The deck, with newly sharpened and balanced blades, is much quieter and smoother than before.  I am pleased with the way it turned out, and believe the old Deere has many more years left in it. 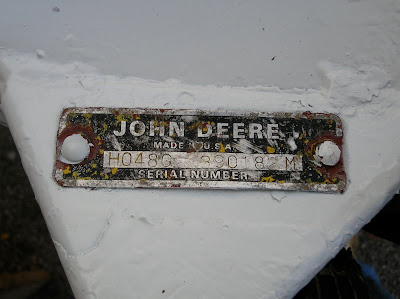 Here is a link to my John Deere mule hitch repair
and my Kohler K341 engine overhaul
I have now added a Harbor Freight winch to the rear of the tractor. You can read about that here. 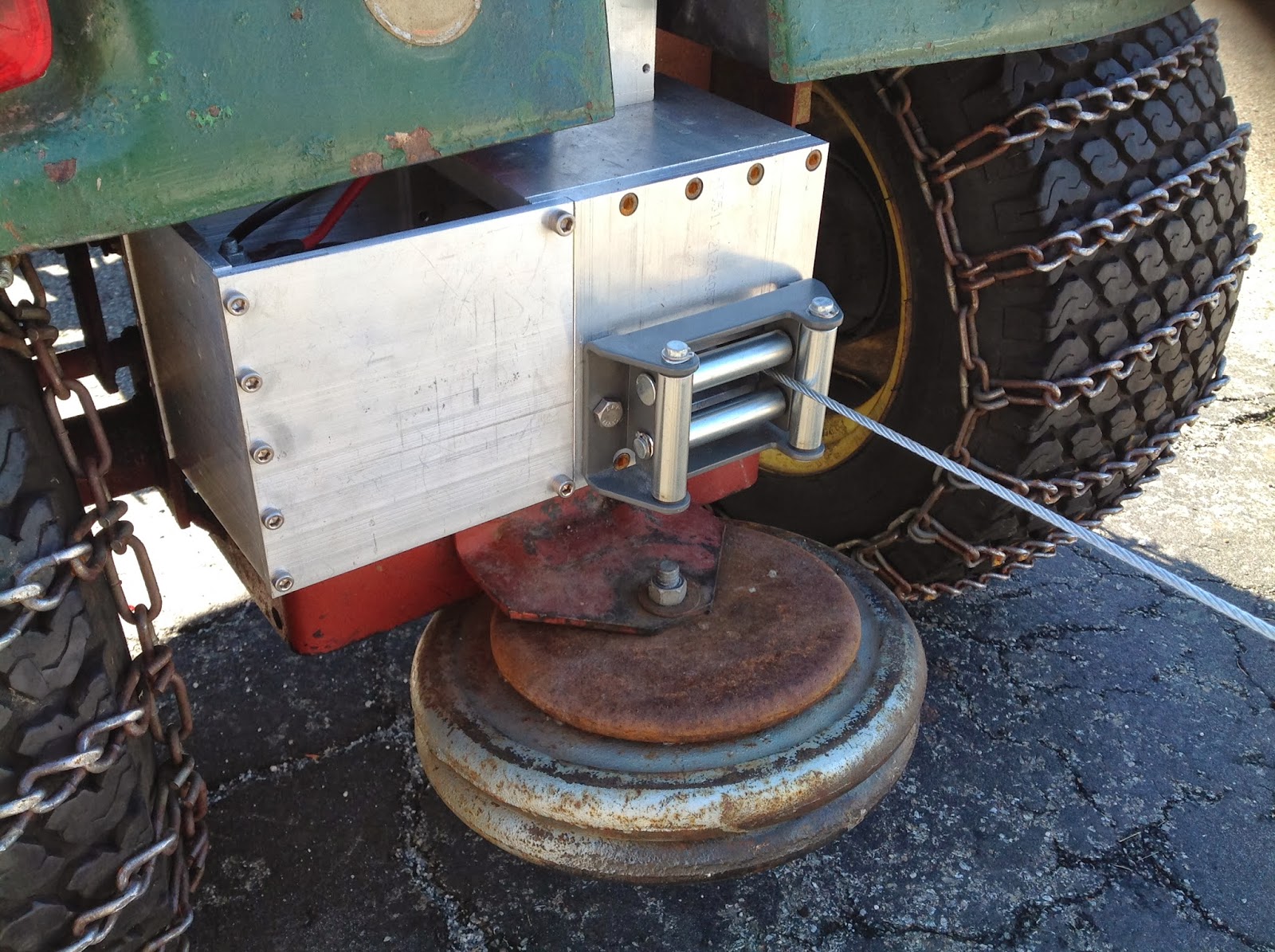 Posted by Robert at 8:28 PM No comments: Links to this post