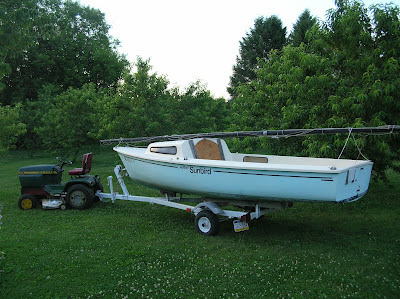 My latest project is a 1979 Sunbird sailboat.  This picture is as purchased.  Astute observers will immediately notice a couple of major problems!   First, the mast is being carried in a very poorly supported and unstable manner.  The second is that the trailer is absurdly short for this boat. 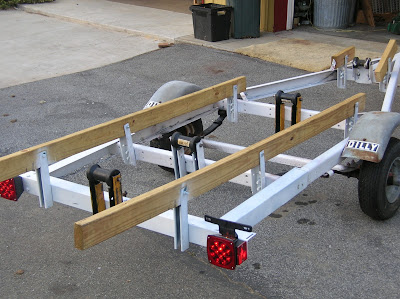 I decided I wasn't going anywhere with this setup, so I concentrated my initial efforts on the trailer.  Step one was to lengthen the trailer.  I was able to add 24" to the frame, and 36" to the wooden bunks.  Since the Sunbird manual recommends 4 keel rollers, I added them, using brackets made from Unistrut.  They make sturdy brackets, and were much cheaper, especially since I had the Unistrut on hand.

An inspection of the trailer wiring revealed that nothing was worth salvaging, so I replaced everything and installed LED tail lights.  The lights I bought claimed to be submersible, but they were submersible in the same way an inverted cup is submersible.  There were openings in the bottom for the wires, and the lenses were sealed with simple foam gaskets.  I made them truly waterproof by sealing all the holes and seams with hot melt glue. 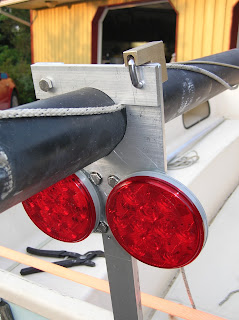 Now to tackle the mast support problem.  My goal was to have something that is sturdy, easily removable, and lockable.  I also decided to add a center stop light to reduce the risk of getting rear ended in traffic.  In addition, the mast protrudes about 4 feet past the trailer lights, which is a bit too far.  By adding lights to the mast support, this distance is reduced to 2 feet.  The support is a bar of aluminum 1/2" x 1 1/2", and the mast holder is made from 1/8" aluminum. The support has pockets on the back side that the rudder hinges go into. Then a 5/16" rod drops into the top rudder hinge, locking to it securely.  When the mast is installed, the rod cannot be backed out.  The mast is secured with a padlock, securing everything in place. 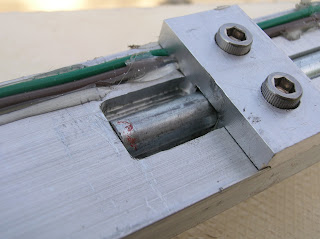 The lights plug into a receptacle next to one of the trailer lights.  The lights are bright and hard to miss. 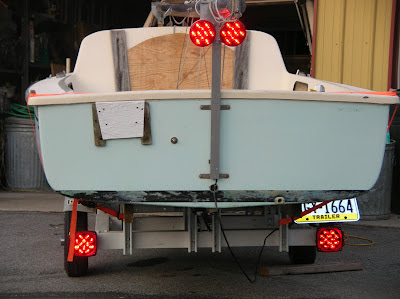 The boom block's plastic pulleys were degraded from 30 years of exposure to the elements.  Since I have a 3D printer, I decided to put it to use, and print my own replacement pulleys in ABS. 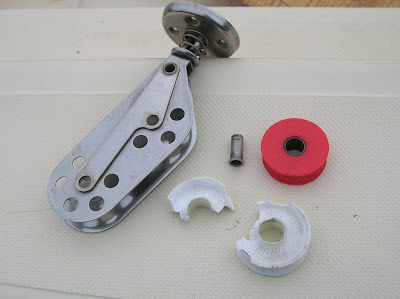 I began by milling of the head of the rivets holding the block together. I milled as little as possible off, for I plan on reusing the rivet. 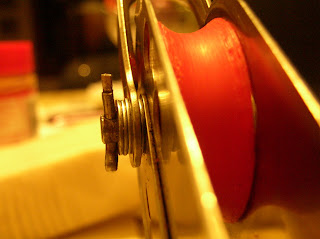 I reassembled the block using stacks of washers to prevent the block from spreading now that the rivet's head is gone.  This works well, and below is the rebuilt block. 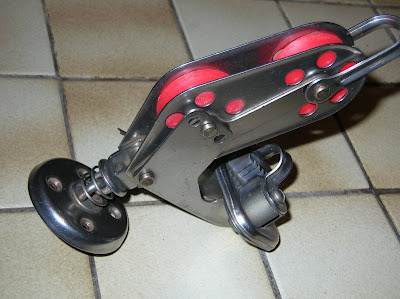 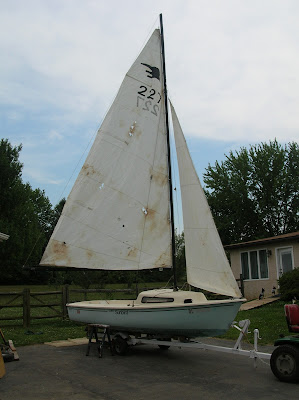 I practiced rigging it in my back yard. Note the mouse-eaten sails.


The Sunbird's maiden voyage was a success.  There are no leaks, and we didn't have any mishaps.  The Sunbird is a great boat.  Stable (for an un-ballasted boat) and easy to handle, she moves along nicely in gentle 5 knot winds.  A nice (and inexpensive!) way to spend a Sunday afternoon.

However, it is not very nice when the wind drops to zero!  The Sunbird took a surprising amount of effort to paddle in.  That experience made it clear that an auxiliary motor was essential.  The Sunbird manual recommends a long shaft motor, max 6 HP.   Unfortunately, long shafts are not common on the used market, and new motors are prohibitively expensive.  I found a 1970 6HP short shaft Evinrude in very good condition, so I bought it and then got to work designing a motor mount to enable me to use it.  This gave me the opportunity to solve a second problem.  Where to put the gas tank?  There isn't much room in the cockpit, especially when one is scrambling around adjusting the sails and switching sides to balance the boat.  Therefore, I designed a mount which both lowers the motor and holds a gas tank.  As a bonus, the motor is moved 10 inches off the stern, completely removing it from the cockpit area.  I made the mount from 1/8" aluminum sheet and 1" x 1 1/2" bar stock and bolted everything together with 47 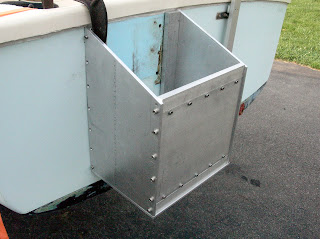 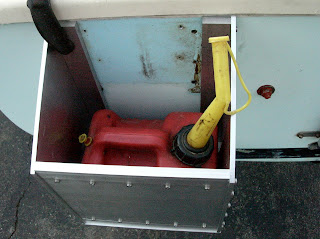 10-32 stainless screws.   I wanted this mount to survive the worst possible conditions while protecting the gas tank and remaining securely attached to the boat and motor.  The mount can hold a 1 1/2 gallon tank, which is all I need.

I machined an aluminum cap with tubing fittings for the fuel and vent lines.  It is spill proof and impervious to water splashing in. 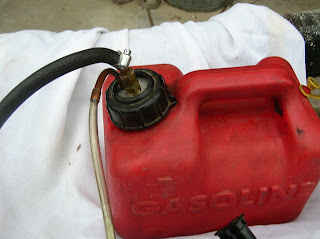 It is bolted to the boat with four  5/16" stainless bolts.  The upper part of the Sunbird's transom is reinforced with wood inside, making it plenty strong to support the motor in this fashion.  The 1970 Evinrude is a nice little motor.  It is extremely well made, and easy to start.  It is also remarkably quite at no-wake speeds, which is the condition that I will be primarily using it in.  At 6HP, it will be loafing most of the time, while a smaller engine would need to be run at higher throttle settings.  It is also not excessively heavy at around 45 pounds. 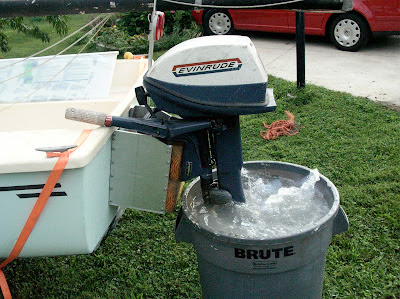 The motor moved the boat along nicely on my first open water test, going what I estimate was about 12 knots, and burning less than 1 gph. Full throttle was surprisingly quiet.  I was curious about the condition of the water pump when I returned home, and after dismantling, I found the pump housing to be badly corroded and the impeller worn.  Pumps housings, new or used, are expensive.  So, I decided to fix mine with a stainless steel liner.  By lucky coincidence, the inside diameter of the pump was nearly identical to the diameter of my scrapped Craftsman air compressor cylinders, which are stainless steel sleeves. I bored out the pump housing, and installed a section of the Craftsman cylinder as a liner. 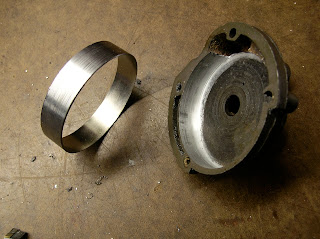 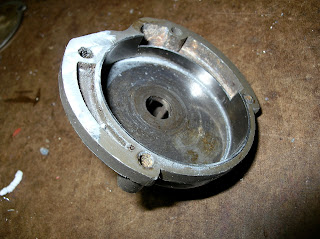 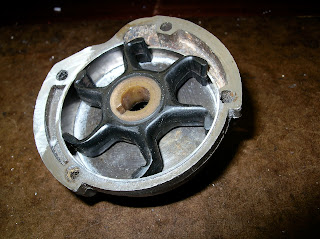 Then I once again raised the motor mount to it's third, and final position.  Now the short shaft motor is mounted only 2 inches below the Sunbird's transom, and it is still plenty deep in the water.   It now clears the water when raised by 3 inches. 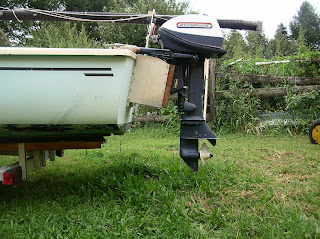 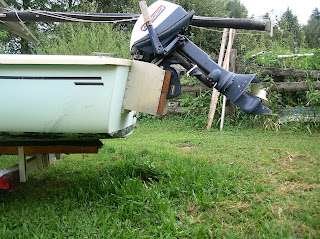 Every sailing trip has made me aware of something that needs to be repaired or improved.  The latest is the rudder spring pin.  The hole in the rudder was greatly enlarged, so I made a pair of aluminum bushings to fit in the hole after I drilled it out to restore it to a round shape. 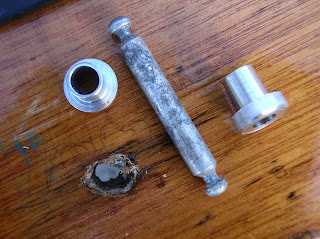 At right, the pin and bushings.  Note ugly hole in rudder.  Below right. Bushings on pin.  When installed in the rudder hole, the bushings meet in the middle.

Bottom:  Installed in rudder.  The larger diameter combined with the flanges should prevent the hole from distorting again. 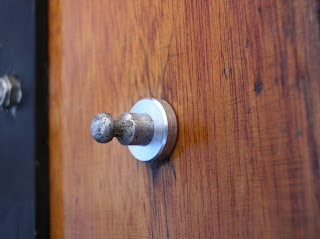 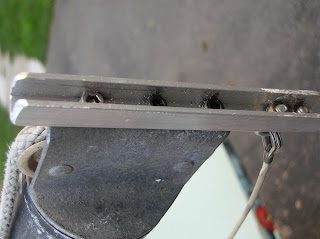 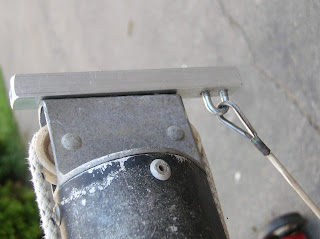 Another quick fix.  The bracket at the top of the mast was missing, and the previous owner simply tied the end of the boom cable to the mast.  I made one out of aluminum C channel. 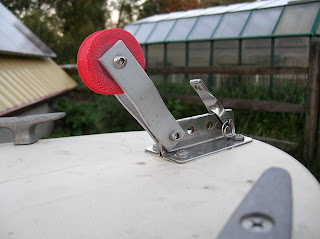 I quickly realized that raising the mast without assistance was a risky operation.  First, you are standing inside a boat with an uneven deck and obstructions like the boom pulley in the center of the deck.  Second, the boat is likely a bit unstable even though it is on a trailer.  Third, the mast is 20 feet tall, and you are at a huge disadvantage as  you are holding the mast only a few feet from it's bottom.  Lose your balance when you are halfway up and the mast can fall to the side, for the side stays are still slack, or it may fall back on you.  Once you have the mast fully upright, the fun is just beginning!  Now you have to maintain forward pressure on the mast while walking around the cabin and up to the bow to attach the fore stay.  Hopefully you have the fore stay in one hand, and it is not tangled up with the various ropes and rigging.  Now attach the fore stay to the bow fitting while not letting go of the mast.  Yes, it can be done, and has been done by many people for many years.  But it only takes one slip to lose control of the mast and probably break something. Even worse, you will be quite embarrassed if anybody was watching you at the time.   Rather than risk the embarrassment, I devised a safe and simple way to erect and lower the mast solo.  I attached a simple pulley to the bow fitting and then I tied the ends of the jib rope together.  I then tied my mast raising rope to the jib ropes and threaded it through the pulley.  Now I raised the mast in the conventional manner, but while taking slack out of the rope.  The mast is much more stable, with less of a tendency to fall to either side.  Once it is fully raised, simply wrap the rope around the cleats at the base of the mast, and the mast is secure.  You can now go up to the bow fitting at your leisure, without worrying about losing control of the mast.  I have also found it easier to tighten the fore stay since I can put tension on the rope while tightening the turnbuckle.  The pulley is not in the way of the jib, so I just leave it there and attach the jib to the next hole.  To lower the mast, simply reverse the process.  For me, the reduction of accident risk is well worth the few extra minutes it takes to attach and remove the rope. 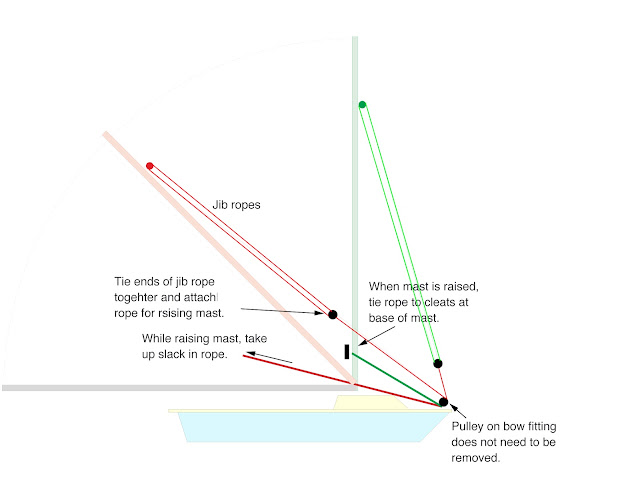 This picture could have been taken in 1983.    A 100% vintage rig:   A 1983 Ford towing the 1979 Sunbird on a 1979 Dilly trailer.  Observant readers will notice that the sails and boom are removed.  A gusty crosswind was blowing across the ramp that day, so I removed the sails at the dock. 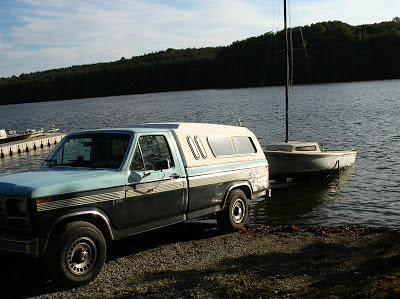