Installing a Tailstock Cam Lock on a 7x Mini Lathe 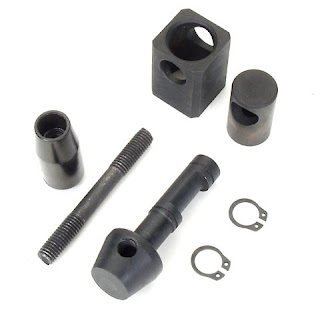 I purchased a Mini Lathe Tailstock Cam Lock from Little Machine Shop.  It is a well made kit.  Actually, I think it is superior to the factory installed locks I've seen on some Mini Lathes.


This is normally an easy to install kit.  However, my tailstock casting was quite uneven where the kit would be resting.  I decided to machine the bottom of the kit to match the angle of my casting.

I had to cut a compound angle and file a radius on the bottom of my kit to get it aligned correctly. Once I had a good fit, I drilled the hole for the shaft.

Even though cutting the angle made my kit shorter, I nearly came out of the top of the flat area on the rear of the tailstock.

Like everything else on this casting, this flat area was not flat, so I milled it flat.   Then I added a flat washer and a wave spring washer to eliminate the sloppy feel of the handle when in the unlocked position.  It works fine without it, especially of you install a spring like the one included in LMS's Tweaks.&.Enhancements kit.  But I like to make everything feel as precise as possible. 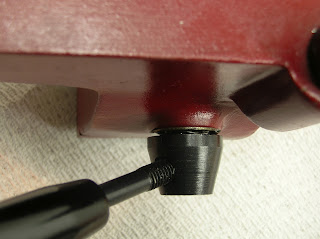 A front view.  I am very pleased with this kit.  It operates smoothly and locks solidly. A vast improvement over the original lock nut. 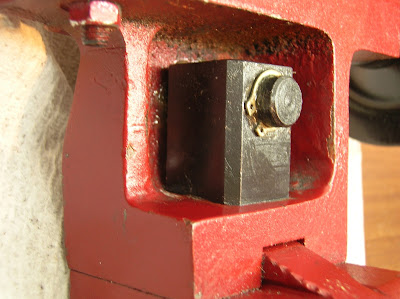 Upgrading a Sears air compressor with a Harbor Freight pump.


I installed a Harbor Freight 3 HP air compressor unit on my Sears Craftsman compressor, which was a piece of junk that twice snapped it's connecting rods.  While the HF unit is well made, with a sturdy 2 cylinder cast iron block , it was driven by a flimsy cast aluminum pulley with very thin spokes that acted as fan blades.  It ran maybe a hundred hours before one of the spokes broke.  It was clear that it was under a lot of stress from improper annealing after casting, and it broke under tension, leaving a gap of about .003".  I tried to weld it, but could not stress relieve it adequately.  It ran a few hours before snapping the remaining spokes. 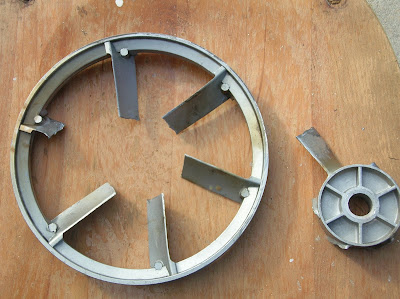 I.wasn't about to buy a replacement from Harbor Freight, because it would likely fail also.  The spokes are simply too thin to withstand the stresses put on it by the air compressor.  Maybe I could find a similar pulley from someone else, but it would have to match the tapered shaft of the HF compressor.  I decided to turn it into a machine shop project and rebuild it with stronger spokes made from 1.5" x 0.5" aluminum bar stock. 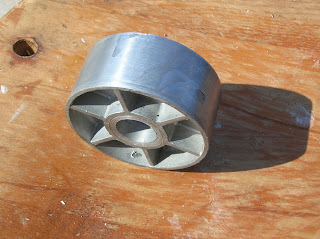 I began by cutting off all of the spokes and turning the hub smooth in my lathe.  I then set up my boring bar in the mill to match the diameter of the hub.  Then I clamped the new spokes in the vise at a 45 degree angle and used the boring bar to make the end of the spokes match the surface of the hub. 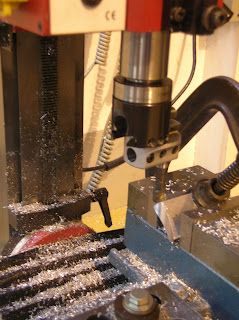 Then I drilled and tapped two 1/4-28 holes one inch apart in the spokes,and corresponding holes in the hub. I.bolted the spokes in place to check the fit and measure the outside diameter of the spokes. 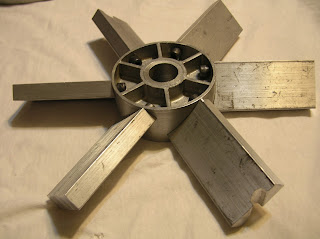 Next I  trimmed the spokes to length, and cut a 5/16" rounded slot to match a corresponding raised area on the pulley ring.  This locking feature carries the load, allowing me to use relatively small 8-32 screws to attach the ring to the spokes. The screws are underneath the belt, and go straight into the spokes.  Each screw is ground down for clearance and held in place by applying J-B Weld to the threads. 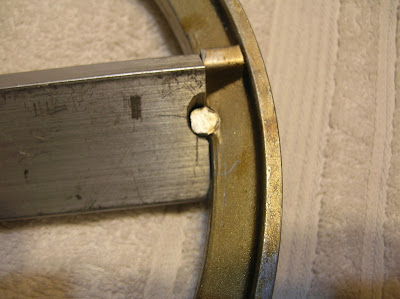 Two spokes installed.  Each spoke has to be filed slightly to compensate for irregularities in the ring casting.  After all spokes are fitted, I plan to bolt everything together while applying J-B Weld to the joints and screws. This should enhance the rigidity and  help it better withstand the considerable vibration that the compressor, which has  no flywheel to smooth it, generates. Hopefully the additional weight of the new pulley will help dampen the vibrations. By vibration I'm referring to rotational vibration, for the torque load briefly drops to near zero every 180 degrees. This causes the belt to shake a bit. Below, the partially completed pulley is receiving a Cat Scan to check for defects. 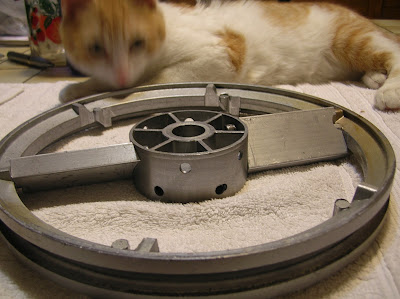 The completed pulley, balanced and painted: 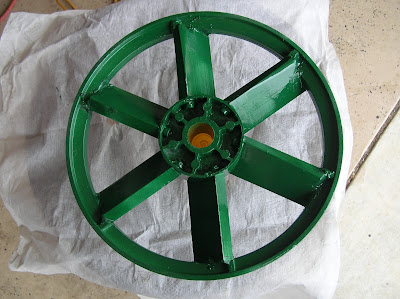 I installed the Harbor Freight compressor on a Sears Craftsman "6 HP" compressor that was quite honestly, a piece of junk.  It had a cheap compressor unit attached directly to a 2 HP motor turning at 3450 RPM.  It was very loud, and the cheap cast aluminum connecting rods snapped after about a year  of operation.  I bought a rebuild kit that I should have returned as soon as I saw that the connecting rods were as cheap as before.  Even though the kit included new cylinders and I essentially had a new compressor when the parts were installed, the connecting rods snapped after only 20 hours of use.  At this point I was pretty disgusted with this compressor which carries the once-proud Craftsman name.

In.addition to the cheap design, it was falsely rated as a 6 HP compressor, but had a 2 HP motor.  Anticipating the questions over the discrepancy, Sears ordered motors from A.O. Smith with the HP rating left blank!  See picture below: 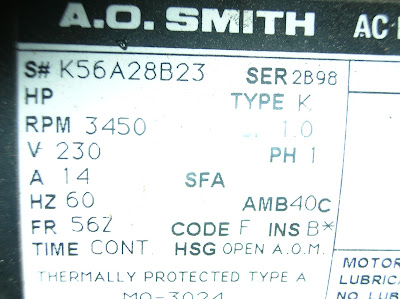 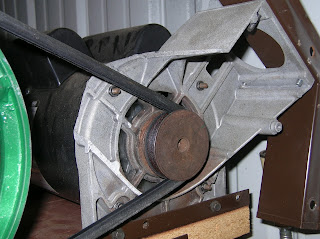 The amperage listed is correct for a 2HP motor.  Maybe 2.5HP, but nowhere near 6.  I cut off part of the compressor casting from the end bell of the motor, and replaced the crankshaft with a pulley. I left the second cylinder holder intact and used it as a mount for the belt guard.

I cut the line to the old compressor and used flare fittings to connect a piece of copper tubing to the new compressor.
Do not remove the T fitting in the tank, for it contains a compression release valve. The pump would not be able to start against the pressure in the tank if this valve is removed.  The small line goes to the release valve on the pressure control switch.
The HF outlet fitting was of a size I didn't have, so I re-tapped it as a pipe fitting and screwed on a half inch flare fitting. 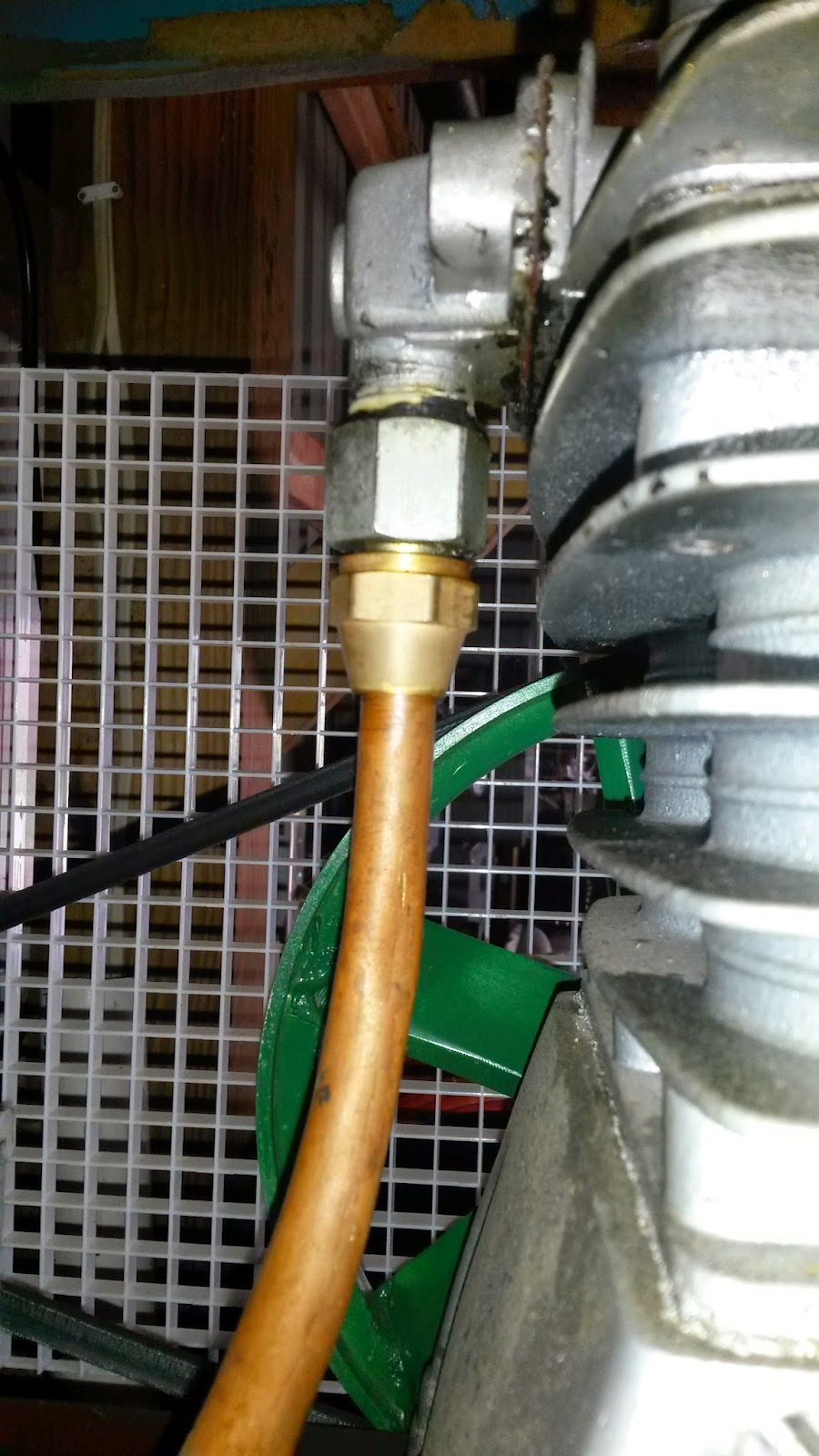 Even though the Harbor Freight pulley failed, overall the HF compressor is far superior to the Craftsman one. It's oil bath design and cast iron cylinder block should last a long time.  Running at only 1000 RPM, it is far quieter than the Craftsman's 3450.  One of the reasons I now find myself at Harbor Freight shopping for tools more often than at Sears.

Update:  My repaired pulley has now been in use for over two years, and is holding up well, with no signs of fatigue or loosening.  However, the compressor blew both the head gasket and exhaust manifold gasket.  I made a new head gasket out of cork, and it is working well.  If you have one of these compressors, be sure to check the head bolt torque periodically.   The exhaust manifold has one very thin area in the gasket that blows easily. I milled a rectangular groove on the manifold mating surface and put a copper wire ring in the groove.  This, plus a new gasket solved the problem.

Meanwhile, Harbor Freight has replaced this model compressor with a new and better made model.  The pulley is now cast iron. But the price went up from the $99 I paid on sale to $149 sale price for the new one.
Posted by Robert at 9:28 PM