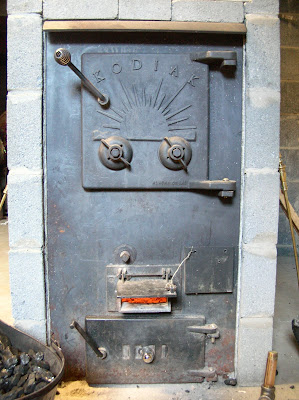 I use an Alaska Stove Co. "Kodiak" model stove for my primary source of heat.  This solidly built stove is made from 1/4 inch steel plate and cast iron hardware.  I believe these were made beginning in 1977, the year Alaska Stove was founded. Unfortunately, Alaska Stove no longer makes this model, or anything similar to it.  Their new stoves are all stoker-fed rice coal burning stoves, while this is a hand fired stove that will take nut coal or larger, as well as burn wood.  Unlike rice coal stoves, which need electricity for both the stoker and a draft fan, this simple stove requires no electricity.  Yet, it will run 12 hours unattended, giving it nearly the same convenience as a stoker stove.  And it is remarkably uniform in temperature over that time period.  The stack temperature typically stays within a range of 300F to 600F, and the hot air produced within a range of 150F to 200F. 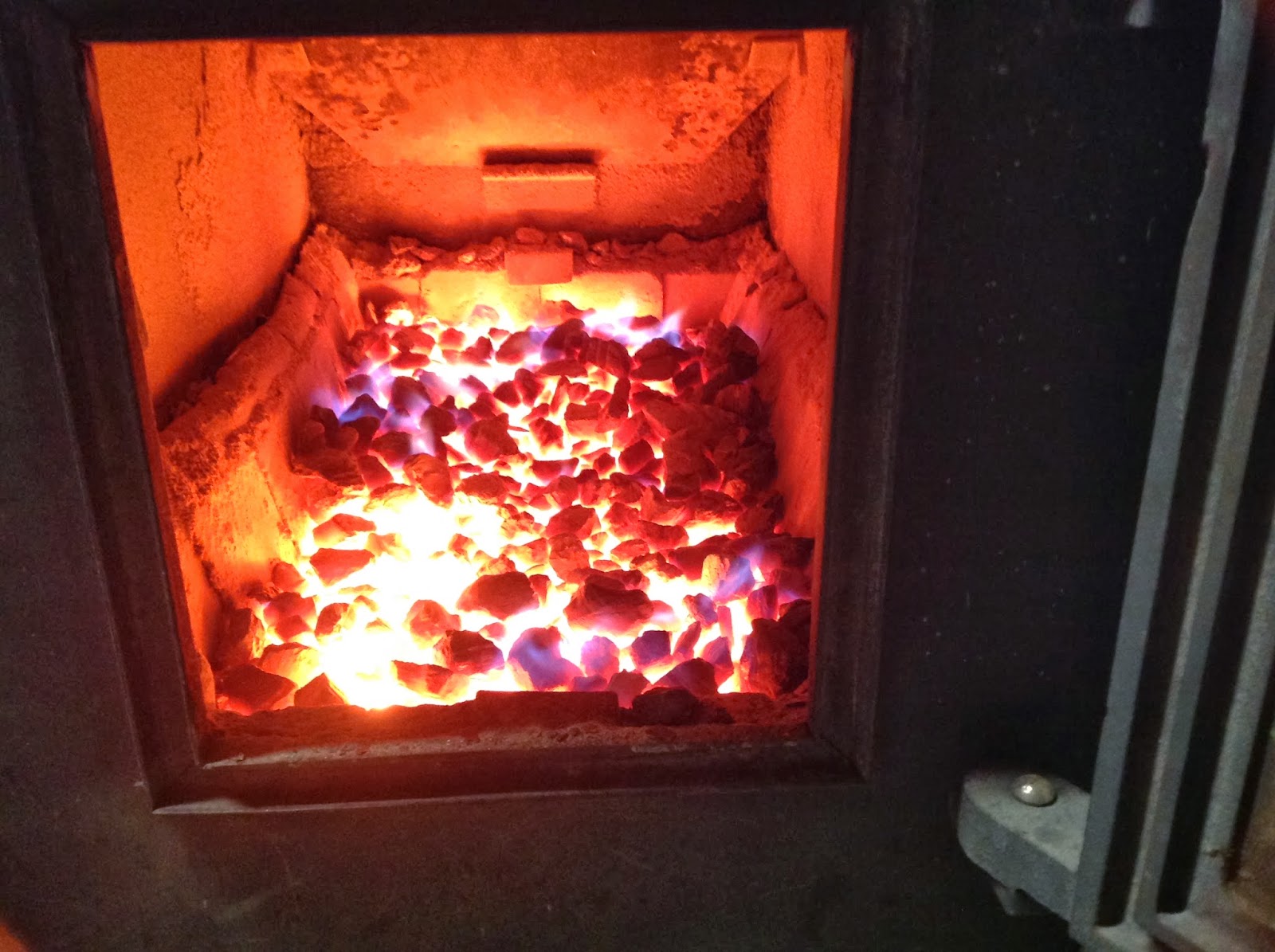 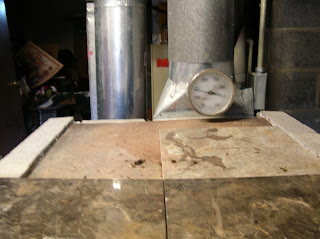 I received the stove without documentation or an outer shell.  However, it was clearly designed to have an outer shell, for the 1/4 inch plate on the top and rear have cutouts along the edges to create air passages.  I made a shell out of 4 inch concrete block.  The block shell creates an airspace around the outside of the stove which efficiently heats the air circulating through it while also making the stove much safer, for the block rarely gets hot enough to burn someone.  Two 8 inch ducts are connected to the shell.  The inlet has a fan to help circulate the air throughout the house.  It is a small fan which moves about 600 cubic feet of air a minute, but it runs continuously.  This way the house temperature is always uniform. The above picture shows the top of the stove and the air ducts. When the picture was taken, the air was exiting at 145 degrees. 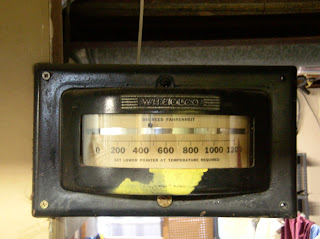 To measure the flue temperature, I use an antique Wheelco thermocouple galvanometer.
This solidly made precision instrument is probably 75 years old and was used in an oil refinery.  It, and thousands of other valuable old items were slated for destruction in order to reduce the refinery's taxes.  This one escaped destruction, but still wears the yellow paint of death.   I cannot find any record of Wheelco.  It is unfortunate that this fine example of American engineering is nearly forgotten, due at least in part to tax laws that encourage the destruction of assets.

After using the stove a few times, I realized that while it is a very good stove, it also had some serious shortcomings.  When shaking the grates, it was impossible to shake them without having coal jam in between them.  It was also too easy to go too far and dump the coal.  I lengthened the link between the grates until it hit the sides if the grates were rotated more than 15 degrees.  This has proven extremely effective.  The shock of the link hitting the sides loosens the ash and makes it fall readily, while it is impossible for coal to drop down and jam in between. 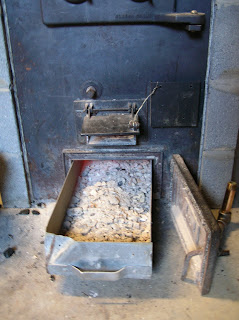 Then there was no ash drawer.  This was a serious shortcoming in a stove that is over 2 feet deep.  Also, the ash door is surprisingly small.  I couldn't do anything about that, but I did make a drawer as big as I possibly could.  It has about 1/4 inch clearance all around.  This was a huge help, but there remained one problem.  Because the drawer was narrow, some ash fell along the sides.  This had to be shoveled out.  I took the stove apart and removed the supports for the firebrick. I drilled and tapped holes into them and bolted sheet metal ash guides to them. This gets about 80% of the ash that missed the drawer. 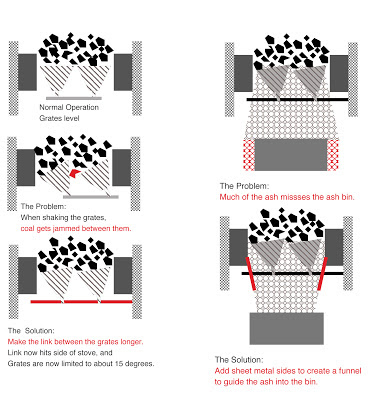 One problem with coal is that it takes a lot of air and a very hot fire to get it going, but once it is going, it needs only a small amount of air. In fact, I only open the main air door when starting, and then close it.  The stove then gets all the air it needs through the small openings in the ash drawer, and even these I have open only about 1/4 of the way.  I should point out that I have a very strong draft up my 25 foot chimney.  Since the coal burns so uniformly for 8-12 hours, an automatic control is not necessary.

Recently I added a safety feature: An automatic closer for the main air door.  Without that, I had to say close to the stove when starting, a process that may take more than a half hour.  Coal can surprise you, for it may smolder at a low burn for a while, until it reaches critical mass.  Then you can see stack temperatures approaching 1000 degrees F in a matter of minutes. Not a safe situation.  My safety system consists of an electromagnet which holds the door open, and a thermocouple controlled alarm with relay contacts.  When the alarm trips, the alarm cuts power to the electromagnet and the door drops by gravity.  I like this because it is fail safe. If the power fails, the door will drop.  If the thermocouple fails, the controller will alarm and the door will drop.  Still, I  consider this a safety backup only and would not intentionally leave the house and depend on the alarm. However, I could someday forget and this little thing just might save my house.  Here are some pictures: 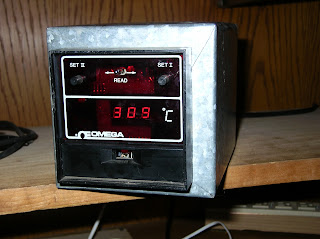 The temperature controller:  An old Omega controller from my junk box.  Also in the box is a Sonalert audible alarm and a 9 volt "wall wart" power supply from some long ago discarded electronic gadget. 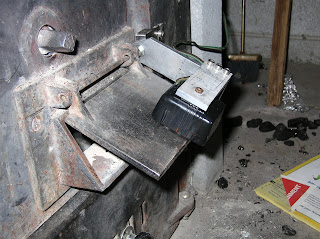 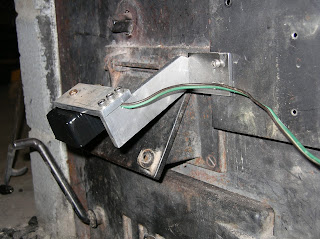 The electromagnet has de-energized, and the door dropped.  While the power is restored to the electromagnet as soon as the stove cools and the alarm stops, the magnet is far too weak to raise the door.  In fact, it has barely enough power to hold the door up.  Better that way.  Any disturbance would cause the door to break free and drop.
The arm that holds the magnet is attached to the stove bracket by a single bolt which is aligned with the air door hinge pin.  This way the magnet can be set to hold the door at any position, or even swung up and out of the way.

I believe Alaska Stove still sells replacement grates for these stoves. At least they did 6 years ago, when I replaced mine after acquiring the stove.  This stove was badly abused and seriously over-fired, warping the grates and the firebrick supports along the sides.  The front was warped too, and  the door would not close properly.  Since Alaska Stove did not sell the firebrick supports anymore, I had a local foundry cast new ones for me, using the old ones as a pattern.  I straightened out the front by intentionally over-firing it without firebrick in the front.  Then I pounded the warped front with a sledgehammer while the steel was soft.  That worked well, and the door closes properly now. 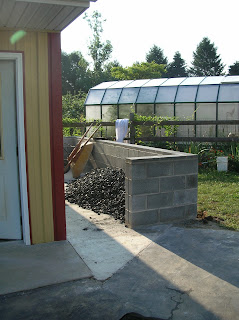 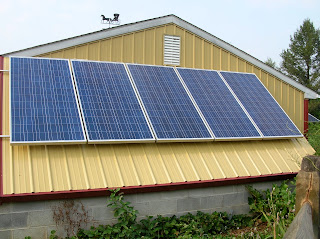 I burn between 3 and 4 tons of coal each winter, at a cost here of $200/ton.  That is like getting heating oil for less than $1/gallon, or propane for maybe 75 cents.   However, the money I'm saving by burning coal is only part of the story.  My house is much warmer with coal heat.  My high efficiency propane heater delivered all it's heat upstairs to the living spaces, as it was designed to do.  This however, left me with a frigid basement which was unpleasant to be in during the winter months. By contrast, the coal stove heats the basement to 80 degrees F.  This heat eventually works its way upstairs, supplementing the heat arriving through the ducts.  Because of the stored heat in the basement, the stove can be out many hours before the house feels cold.  By contrast, when heating with propane, the house only felt warm when the heater was running.  Yet, even when running the propane heater for maximum efficiency by turning the heat down whenever possible, I still had some January propane bills that were larger than my entire season when heating with coal.