Tapering the end of a glass optical fiber

My first patent was for a machine which tapered the ends of a glass optical fiber.  Back then, we had to insert optical fibers, which are only 125 microns, or  0.0049 inches in diameter, into holes in a soft plastic material.  We were making optical waveguides in a sheet of polymer and had to connect fibers to them, much like one would connect wires to an electronic circuit board. A simple cleaved fiber had very sharp edges which would damage to sides of the soft polymer hole. 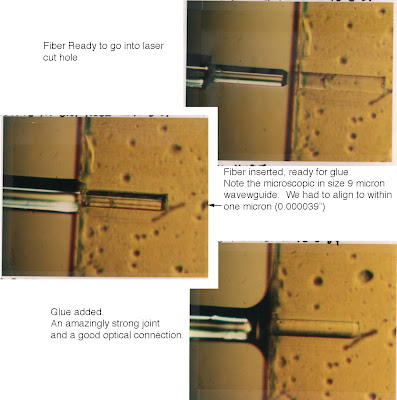 I.had.to chamfer those edges, but how to do it? Fibers are tiny, glass, flexible, and fragile.
We had precision polishing equipment available to us, so I decided to make a fixture which would fit onto the polisher. I would use the rotating motion of the machine to rotate the fiber, which was just a few feet long and could be coiled up.  The polisher was designed to hold parts in 5 inch rings, so I made my ring compatible with that. 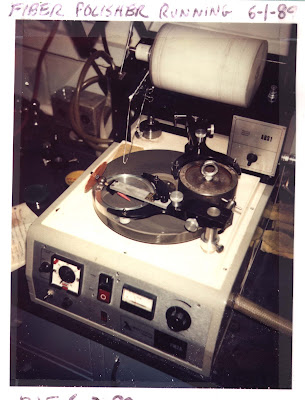 The concept was easy enough.  The ring would naturally rotate as the machine ran.  I made a track on the top of the ring for a steel ball.  The ball had a hole in it, into which was inserted a fiber holder.  An arm held the ball stationary, but free to spin as the ring rotated under it.

The first attempt, using a flat track on top of the ring, was a failure.

The spinning ball wanted to align it's rotating axis horizontal, when I needed it angled down towards the polishing pad.  Some additional thought and a few calculations revealed that there was a way to make the spinning ball's axis point exactly where I wanted it. 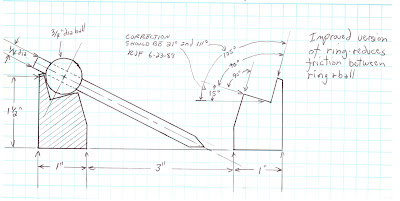 The resulting ring looked strange, but it worked!  The fiber was now touching the polishing pad with nearly zero pressure.  I could sharpen that fiber to a point, if I wanted to.
While we no longer use the idea ourselves, I occasionally see it referred to in scientific literature and other patents.
Posted by Robert at 9:53 AM