Overshadowed by their famous Victrolas and the 1929 acquisition of Victor by RCA, the Victor Radio is under-appreciated today.
The 1929 Victor was not an RCA design, even if, like most other manufacturers, it relied on RCA held patents. In fact, until RCA acquired Victor, they bought radios from their parent companies, Westinghouse and GE. The US government brought antitrust charges against them, forcing them to divest themselves of RCA.  Needing manufacturing facilities, RCA bought nearby neighbor Victor, and the well-designed Victor radio faded into history.... 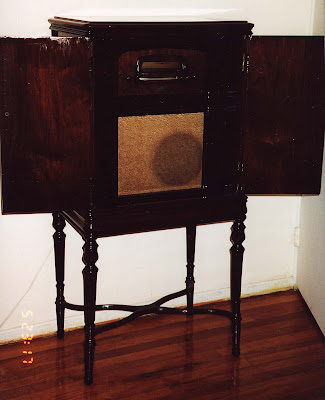 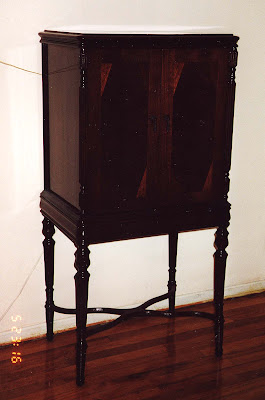 The 1929 Victor radio is a remarkable piece of early radio technology. It is one of the earliest radios that one simply plugged in, rather than relying on storage batteries and chargers. While such radios soon became commonplace, what really set the Victor apart was it's unique construction and outstanding sound quality.  A lot of credit goes to the Victor's speaker, which is strikingly modern in appearance, and quite a departure from the tinny magnetic speakers used by most others.  Put the Victor speaker beside a modern acoustic suspension speaker, and you would see very few differences.  The most significant difference is the Victor uses a field coil instead of a permanent magnet, and it is huge. 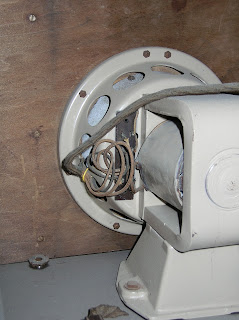 Credit also goes to the Victor amplifier chassis, which is separate from the radio.  Again, one could say that Victor was ahead of their time, by having separate amp and tuner components, much like modern systems.  I'm sure Victor did it because they also made modern electronic versions of their famous Victrola phonographs. The same amp could be used for both.
The amp used a pair of type 45 tubes in a push-pull configuration.  Good for a room-filling 10 watts of good sound with plenty of bass - rare in those days.
Note the Victor logo with the dog Nipper embossed in the brass transformer housing.  That housing holds two transformers, the push-pull output transformer, and the push pull input feeding the grids of the 45's  Victor relied heavily on transformer audio coupling as opposed to using capacitive coupling. 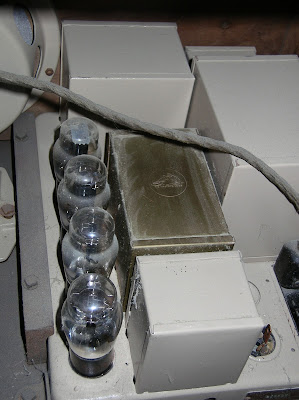 These are not the original colors.  It appeared to have a green protective coating, like that seen on the inside of airplanes.  There was a fair amount of rust on the amp chassis and steel transformers, so I painted everything tan.  Not original, but it looks good.


The tuner chassis plugged into the amplifier/power supply chassis with a heavy cable.  Here is a picture of the connector.  Like everything else, it is solidly built to last practically forever.  It is as good as new, without a hint of corrosion.  The cable carries high voltage for the tubes, filament voltage, 110 volts for the dial light, and the audio signal to the amplifier.

The tuner used a novel configuration for eliminating oscillations, a vexing problem in those days.  The 4 RF amplifier stages were spread far apart in a semicircle, with separate linkages going from the dial to each tuner. Effective, but the resulting chassis is huge.


The circuit is a "TRF", or Tuned Radio Frequency circuit, which was rapidly becoming obsolete.
One of America's greatest inventors whom you probably never heard of was Edwin Howard Armstrong.  He invented the superior Superheterodyne circuit which is still in use today.   He also invented FM radio, unfortunately for him, a little ahead of it's time.   The "Super" could do one thing the Victor could not, and that is separate weak distant stations from strong local ones and make them listenable.  However, if there are no strong ones nearby, the Victor is quite sensitive with a good outside antenna and ground connection.   The Victor lacks one other important feature which was introduced by Philco in the following year - Automatic Volume Control, or AVC.  Lacking that feature, one must be careful to turn the volume down if you were listening to a weak station, for the first strong one you come to will  blast at near full volume. 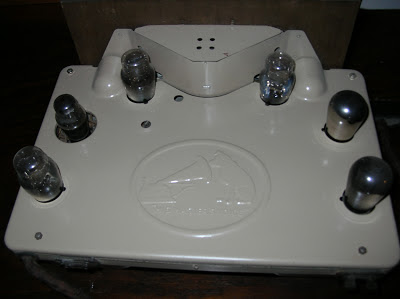 Also unique is that the chassis is built "upside down", with all the components attached to the bottom of the chassis.  Then a lid is attached and the tubes installed.  Notice the Victor logo in the lid.  This radio is as much a work of art as it is a radio. The 4 tuning capacitors are in cans protruding from the bottom. I don't believe you will see anything like it anywhere else.  It is actually easy to service since you don't have to turn the chassis over to access the components. 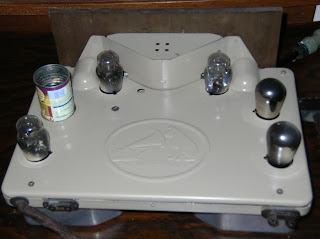 The detector tube is supposed to have a shield.  It was gone, unfortunately. In this picture is a tin can which will be a tube shield someday.
Two of the tuning capacitor cans can be seen in this view, as well as the phonograph input jack  on the left, and antenna terminals on the right. 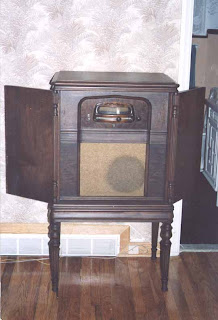 This radio was such a basket case that the antique dealer I often did business with back then gave it to me for free. It had been exposed to the elements, and there was considerable damage to the veneer.  The legs were broken and the crossbrace and legs below that point were missing. What you see in these pictures are reproduction legs I made. At right, a picture before I made the legs.
Also, every tube was gone.  Replacing all 10 tubes today can cost a fortune.  Fortunately, I had them in my inventory.  Still, the radio didn't work.  Turns out that Victor had a problem with their audio transformers failing, even though they were clearly carefully made.  They are housed in brass or steel boxes which are then filled with pitch.
I had no choice but to rewind the transformer between the last audio stage and the power output tubes.  This meant heating it to melt out the pitch and removing the windings.  Hand rewinding the 2000 turns was not practical, so I made a simple motorized coil winder. For insulation between windings, I used modern day Mylar.  To re-pot it, I used silicone.  That was 10 years ago.  While I only play it perhaps once a year, it always sounds good. 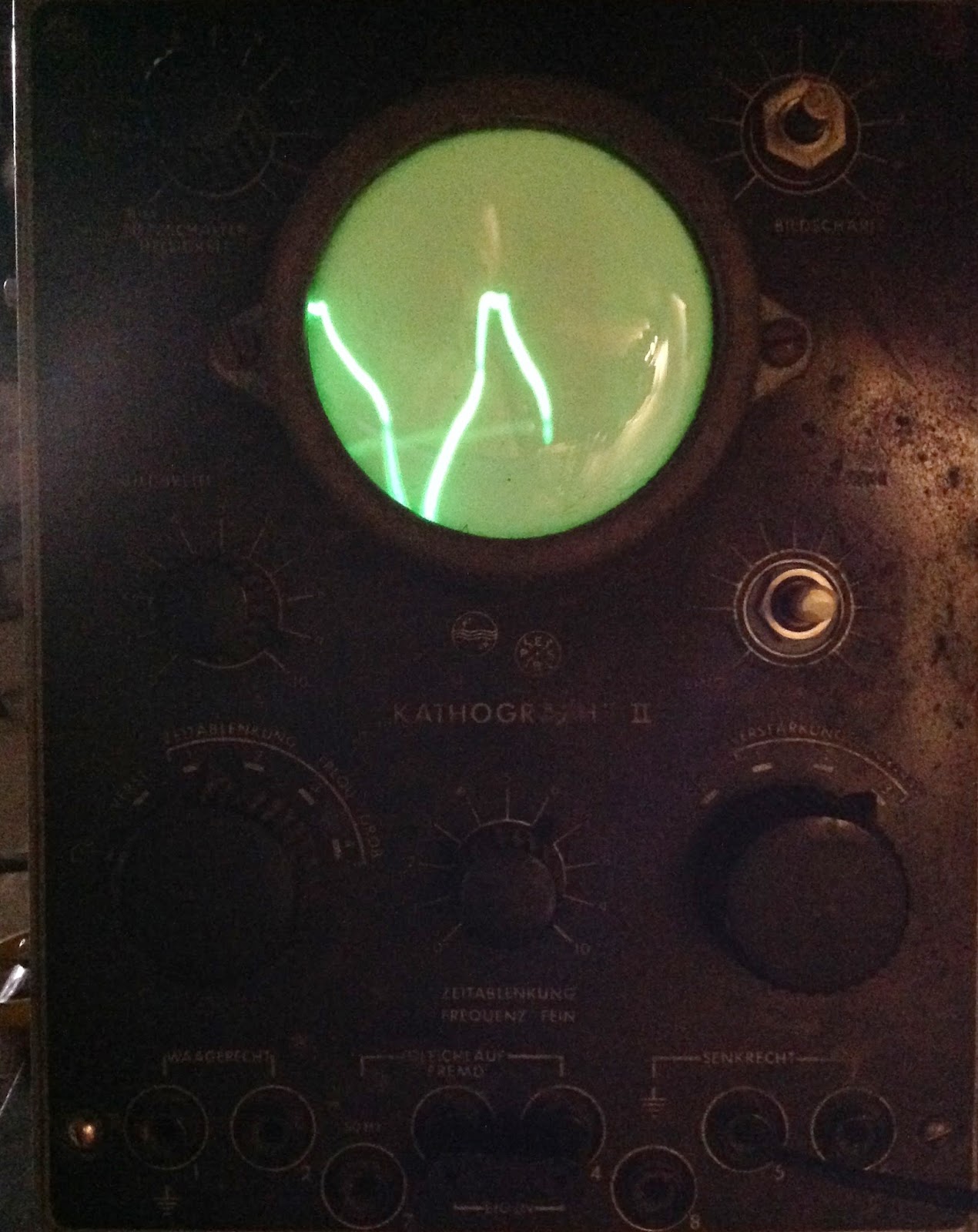 If you enjoy reading about antique electronics, you may also enjoy my post about my 1942 Philips Kathograph Oscilloscope  and my 1948 Zenith Trans Oceanic
Posted by Robert at 7:54 PM